I had one sparkly skein of yarn left (and scraps!) from the bunch Bill surprised me with a few months ago. This one was in a colourway called 'glacier.' It decided it wanted to be a bag. I decided it would be a bag made of two Tunisian short row hexagons and that is what it has become. 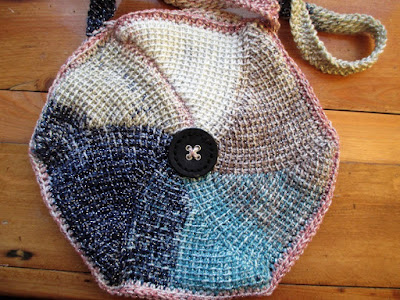 Each side is slightly different only in the way the colours appeared. 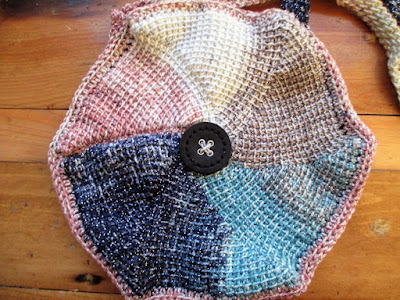 To make each hexagon, I used the DK weight yarn and a 5mm (H in the US) afghan hook. I chained 23 and picked up a stitch in each chain, then worked them off as usual. In each subsequent row, I  skipped the last stitch, and repeated that until I had one stitch left. Then I began the next wedge by working down the side where the skipped stitches were and repeated the process. When I had 6 wedges, I slip stitched across the last wedge at the decrease end and then slip stitched that edge and the beginning chain together to connect the hexagon. I did a regular hdc around the edge. The buttons were added as embellishment--I picked them up in a charity shop in Buncrana. I slip stitched the hexagons together and then did a handle in a different Tunisian stitch. Turns out this stitch has a nice vertical stretch to it, that could come in handy for some future project! 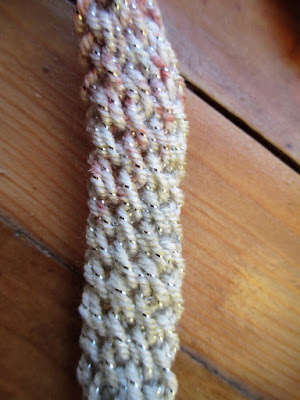 The leftovers have gone into the bag that contains the bits I am using to make a mitred square blanket, so there's a bit of sparkle left 😃