Tonight was the tree lighting in Market Square. Bill had read that it was at 5, so we took the 2 minute walk down there a little beforehand. Even though we knew it would not be right at 5, because you always have to add an 'ish' to any given time here, we wondered why there were so few people around. Bill wished he'd worn a heavier hat, so we walked home and he changed to a different one. We walked back. By then we figured we had the time wrong. I heard my name being called and turned to find Gerard, who was arriving to set up the library for the tea and biscuits, music, and face painting that was happening after the lights were turned on. We walked around a bit and then suddenly, he was back. He suggested we come into the library and wait there, so we did. There were a few other people gathering, so we had tea and chatted. Here he is, plating the lemon puffs, a type of biscuit (cookie). 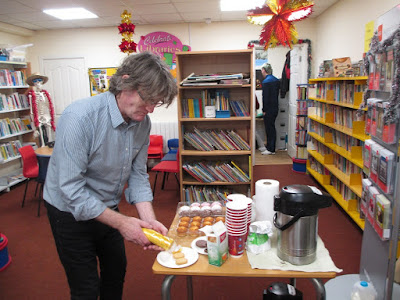 At about 10 minutes to six, we went back out into the square. Our postman stopped to say hi and he said, 'Well, William, you could be Santa and you wouldn't need a costume,' referring to Bill's white beard. Shortly after that, Santa arrived on the front of a fire truck. The 'regular' lights in the square were all turned off. Everyone counted down from 10 in the darkened square. And then the lights were all switched on and everyone cheered. It was a nice little community event.