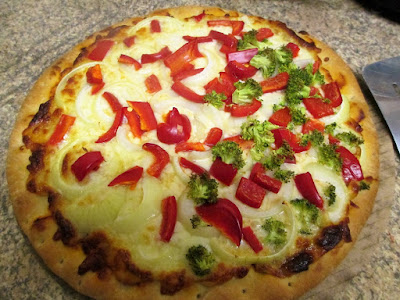 I was going to make pasta with veggies and sauce for supper tonight, but we went to the shop to pick up some eggs and to grab more bananas while they are still on sale, and I spotted take and bake pizzas on clearance. Bill had been saying he was craving pizza, so it seemed like a good day to pick one up and postpone the pasta until tomorrow. The choice was between margherita and one with sweet corn, some other stuff and possibly chicken. I did not look closely at that because the sweet corn eliminates that as a possibility for Bill. I picked up the plain one and doctored it up myself. Hard to see the white onions, but they are on there with the red peppers and the green broccoli. It is not the healthiest meal we've ever eaten, but it was tasty.

Just before I did the pizza, I baked some banana muffins. 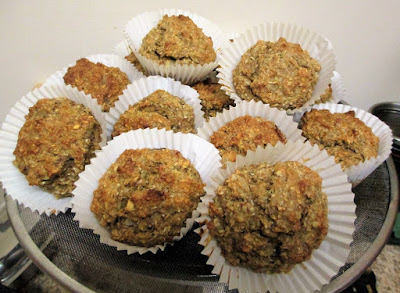 These are both very tasty and very healthy. The oats had been soaking in the fridge since last night. I'd planned to bake them earlier, but our oven takes forever and a day to heat up, so I decided I would only turn it on once today. By doing the muffins first, I had the oven already nice and hot for the pizza.

These are a variation on my usual soaked oat muffin recipes. For this I soaked 2 cups of jumbo porridge oats (old fashioned oats in the US) in 1 1/2 cups milk overnight. When I was ready to bake them I added 3 mashed up medium sized bananas, 1 egg, 2 tablespoons of brown sugar, and some coconut. Then I added 1 1/4 cup wholemeal flour, 1 teaspoon each baking soda and salt and stirred that in before adding a handful of walnut 'crumbs.' I whizzed walnuts in my little chopper and used them that way. I baked for about 20 minutes at 180C (I baked these at 400 when I made them in the US) and ended up with 15 muffins.

These will be handy to have for breakfast, snacks, or even dessert. 😋