A couple of weeks ago I was scrolling through a crochet e-magazine, borrowed from the library. I LOVE the e-magazines that are available. There is a good selection of titles that we can borrow and I always have several on my tablet, on topics ranging across genres--food, books, news, archaeology, and of course, stitching and making. I have found some good charts in these magazines and plenty of information that sparks ideas.

So I was nearing the end of that particular issue when I came across a lone chart for a motif called, 'Hydrangea.' I love hydrangeas, especially here with the amazing deep colours, but the word also brings back memories of a cat we used to have whose nickname was Queen Hydrangea. I grabbed a hook and some sock yarn scraps and started making a hydrangea motif. It was only a few rounds, so worked up quickly. I liked it, so grabbed another scrap ball of sock yarn and made another one, joining to the previous motif on the last round. I was having fun, so I kept making more hydrangeas and joining as I went. The night before we left for Clifden, I decided I had enough hydrangeas joined together to be a scarf, so I grabbed some black fingering weight and started on a border. I was making it up as I went and ripped back to start again several times, but I finally had something I liked. I did not get all the way around before I had to give in and go to bed because my eyes did not want to stay open. We left early the next morning and I'd brought other stuff to work on there. When we came home the other day I finished the last little bit and wove in the ends. I like it and it looks like perhaps the temperatures might possibly drop a little next week, so maybe I can start wearing this kind of stuff soon! 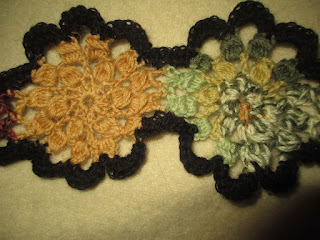 A whole bunch of these attached would make a fun throw, afghan, shawl, jumper, or waistcoat.

And I added a couple of rounds to the original motif and made a small coaster, using size 10 crochet thread. So many possibilities. 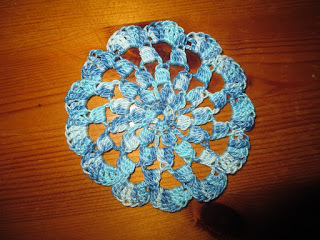 In a little while I plan to settle in with another cuppa and scroll through another e-magazine. Who knows what kinds of ideas will show up?