Knit and Crochet Group Has Begun

My bleary-eyed and half awake self wandered into the kitchen at about 8:30 this morning to eat something and turn the coffeemaker on. I glanced out the window over the sink and then stopped to admire the view of the brilliant green shrubbery and the brightness houses against the dark sky. 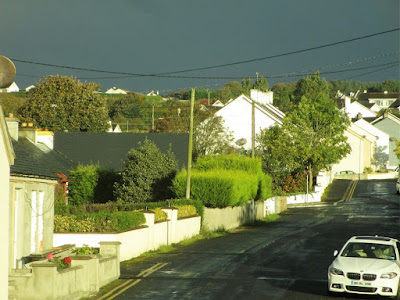 Answered an email from a friend, had some peanut butter toast and a banana, drank a vat of coffee, scrolled through some news, talked to Bill, and then got ready to go to the library for our first gathering of yarn people. I had no idea what to expect, so I decided not to expect anything.

I stuck some small balls of yarn and a crochet hook in my bag and left a few minutes early, figuring I'd be there if Gerard needed me to do anything like move chairs around. If not I would sit and crochet while I waited to see if people came. I did not do either of those things. One woman came in just after I did. Turns out she did not know about the meeting, but was interested, so she stayed until she had to leave for her bus. Others came in. We chatted for a while and then talked about which day to meet, how often, what we wanted from the group, where to get supplies, and other stuff. We rather quickly had a plan in place--we will plan to meet every Friday from 11ish. It will be informal and people can come and go as they need/want to--Gerard goes to lunch at 12:30, so we will have that block of time. One woman wants to learn to crochet, a couple know how to knit but want more practice, a couple of people have not done any knitting in decades and want to take it up again, and one woman, who could not be there today but plans to come in future, wants to make a Christmas gift for a friend and she figures having a set time to show up somewhere will encourage her to work on it. It is a great mix of skill levels and generations. Gerard is offering his support as far as gathering resources, making copies, printing things, providing coffee, tea, and biscuits, and whatever else comes up. I am thrilled that it seems like it will work out and he seems happy and even excited about how it is all coming together.

As it happens, I will not be able to be there next week because Bill and I, on the spur of the moment the other day, booked an apartment in Clifden, in County Galway for a few days next week. The others will meet anyway and I will be looking forward to the following Friday when I can be there again--it is always fun to hang around with yarn people!

I'm glad it's off to a successful start! I have a knit and crochet (and embroidery and beading) group at my office and we meet over lunch every Tuesday. Everyone brings whatever they are working on or sometimes we work together on a project for charity. I look forward to it as it really fosters friendships and connections.
Have a lovely weekend,
Dana

Thanks, Dana! Your group sounds great! I would look forward to it too, as I am already looking forward to this one. It can be tricky trying to get a sense of what is going on in these small rural communities so this will help with that. I have been treading very lightly and I was very open-ended when I started talking to Gerard--I asked him how I could be useful to the library and this is where we ended up. Being a blow-in I figured it was best to just make myself available and go with the flow :-)

Looking forward to a beautiful, chilly, rainy weekend. I hope you are enjoying a beautiful fall Friday :-)