We stopped at the library on our walk today so I could return this book. 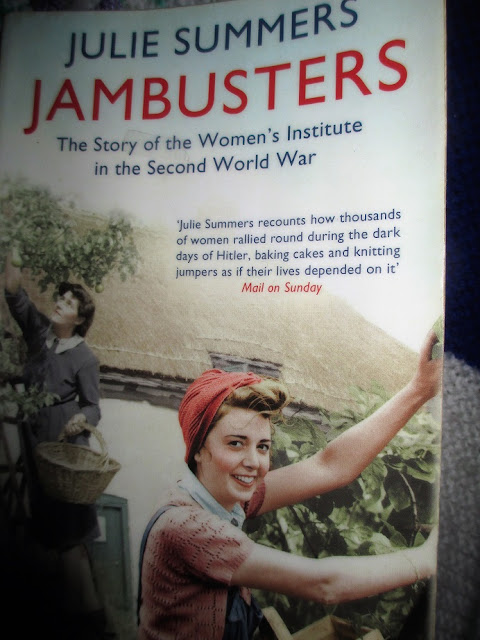 What an enjoyable book it was--entertaining and informative.  I knew about the Women's Institute (WI) in a very general sort of way before reading this. I'd come across references to it in my reading, both fiction and non-fiction. Several years ago, when we still lived in Maine, I got a series on DVD from the library there which is called Clatterford in the US, but Jam and Jerusalem on this side of the pond. I enjoyed it very much. I would, because it is a 'English village life' comedy that was centered around various women who were the WI branch in that village. I would have enjoyed it even more had I read this book, or one like it, before watching the series! I found the book because a friend in the US told me about a current series she was watching on Netflix and when I googled that, I found out that this particular series is a fictional account, based on this book. Next stop was the library site where I found the book and placed my hold. The series she was talking about is called Home Fires there--do not know whether it has a different name on this side.

For me the book was a wonderful glimpse into a very important societal institution. The WI was started in 1915 in a village in Wales and it was based on a similar Canadian organization. Official WI branches exist only in England and Wales and only in rural areas. Scotland and Ireland both have similar women's organizations, but they are not affiliated with the WI.

This was a very important organization for rural women and for the larger society. For rural women, getting a local WI branch meant opportunities to socialize with women from all different class backgrounds--women who would not have interacted with each other under normal circumstances, let alone become friends, were able to work together in their WI. Farm women were quite isolated, so the chance to get together with other woman to do community work, learn something new, or to have tea, cake, and a chat was very welcome. They could also earn a bit of extra money by bringing produce, eggs, and other goods to the WI markets. There was always an informative/educational speaker at the meetings and a social time.

Once WWII began, the WI took on an expanded role and the governments relied on them to help with the war effort.  They helped organize and carry out the evacuations of city dwellers to rural areas. They took in children for various periods of time. They grew produce which could then be sold and which helped alleviate some shortages. They were asked to pick medicinal herbs like foxglove, rose hips, and others when medicines could not be imported. The rose hips, which are especially high in Vitamin C, were picked, collected, and processed into syrup, some of which was sent to children in France and Poland as well as being used at home. Near the end of the war, WI members had provided 500 tons of rose hips for this purpose. They also made lots and lots of jam, which allowed them to preserve seasonal wild fruit that would otherwise have gone to rot--the government gave them extra rations of sugar for this purpose.

In addition to food, WI members knitted and sewed to help with shortages of fabric. The older women taught younger women how to mend and alter clothing and they sometimes held open days where people could bring their clothing to be mended.

WI is still a functioning institution. It has been very important to the women who are a part of it, even as time marches on and the cultures in which it operates change. As Sylvia Norcott, one of the women interviewed by the author stated, 'The WI is not just an institution, it is a way of life.' (p 140)

The book is quite an enjoyable read. The author used both interview material and documents like meeting minutes and letters to gather information about women's experiences in the various WI branches. At the same time, she fits the WI into the larger culture and explains why it was so valuable. The mix of historical reporting and oral history makes it all seem so much more personal than the historical overview alone would have been. At the end of the book, she updates the reader on what happened to the women we met in these pages after the years covered by the narrative. That is nice, because you do get to know them a little bit in the preceding pages.

This is a book well worth reading and I am glad I found it!