I have been working on these cosy, cushy thick and heavy socks for a while now. Today the ends on the second sock were woven in and snipped. Yay! 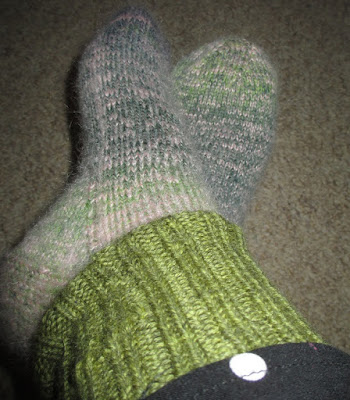 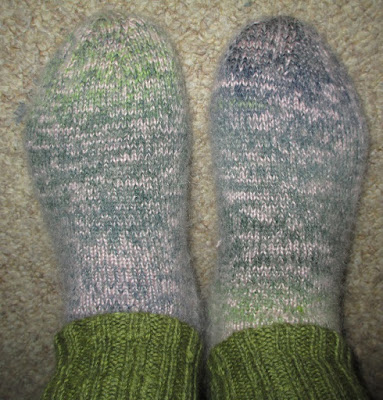 I think I started these sometime during the last day or two in August and I whizzed through the first one fairly quickly. I took a break after that for a few weeks because knitting these was hard on my hands. For the cuffs I used some yarn salvaged from a knitted lace shawlette/collar sort of a thing that a friend spotted in a charity shop early this year. It had a couple of big holes in it, so I did not try to fix it, but the yarn is really nice and it had a great button, so I cut that off and ripped out the knitting. I still have more left to use for something else. I used (US) size 1 double pointed needles, which were small for the yarns I used. The cuffs were not really an issue for my hands--the ribbing came out quite firm, but thick and cushy like I wanted it. The rest of the socks were done using a strand of sock yarn and a strand of mohair held together, so it was thick for the size of the needles, which is what you want in socks. They wear better if they are knit tightly. The decreases at the toes were especially tiring, but I am so happy to have these done just in time for chillier weather. The tile floors we have in the hallway, bathroom areas, and kitchen stay cold. The wood floor in the dining/sitting room area is pretty chilly too. So these will be handy--and they feel so nice on. Now I will lay off tight work like this for a while and turn to something else. Tomorrow morning will be the first meeting of the knitting/crocheting group at the library so I should probably start a portable project to bring to that. I have a large and mindless crochet project ongoing, but I am working off a big cone for that, so it isn't very portable. I will decide on something.