We took a stroll to the shop this afternoon to pick up a few groceries.It was a very productive shopping trip! Not only did we get our bread, milk, eggs, and some produce, but we learned about some upcoming village activities.

Bill was surprised at my enthusiasm when I spotted this sign and gasped, 'A garden fete! I have read about so many fetes in so many British novels and here is one coming up!' He kept asking me what I was talking about and I kept jabbing my finger in the air in the direction of the sign. What fun! 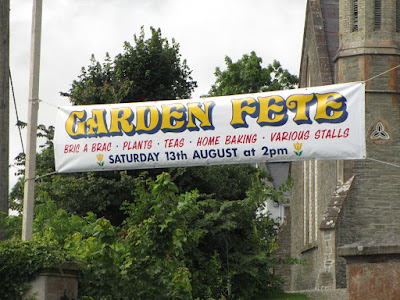 The weekend after that is our very own Moville Festival 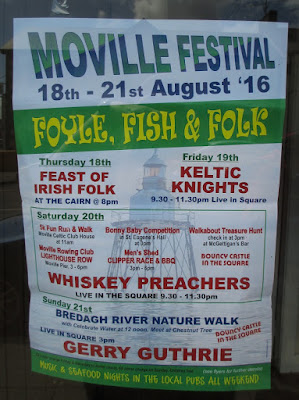 And perhaps best of all, there is a new charity shop on Lower Main St where another charity shop used to be. The old one closed last week and by Tuesday the new one was open (Monday was a bank holiday). Today we stopped in and since the shop is small and the books are in the same place, it did not take me long to get to that section. Bill was laughing at me standing there breathlessly saying things like, 'Oooh! Look at this one!' and 'Wow, who'd've thought I'd find this here!' and other such things. I sometimes feel hesitant about going into very small shops because if I look around and walk out without buying anything, I feel guilty. And this shop is in aid of a rehabilitation centre, so it is a good cause. I did hesitate out on the sidewalk, but Bill went in so I followed. I needn't have worried. The book section has a good deal more free space now than it did a little while ago.

Found some good resources for the German lessons--older, but still useful. 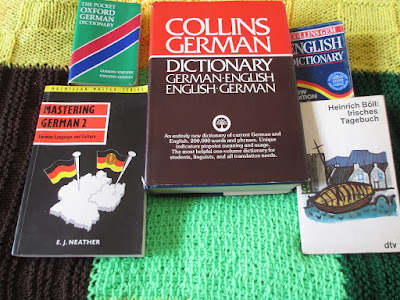 The English dictionary is for some stitching ideas--been keeping my eyes open for one for a while.

I could not believe they had this Miss Read book! Friends have recommended her to me and I found one book in the Mayo library system when we lived in Ballinrobe, which I enjoyed very much--she just does not show up much, but here she was--3 novels in one volume. Yay! 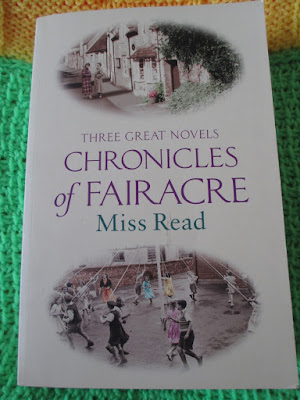 The other day in a different charity shop I found a Miss Silver novel by Patricia Wentworth. She is an elderly lady who knits and solves mysteries. I think she was a precursor to Miss Marple. I was able to find several of her books when we lived in Brunswick through the Maine library system, but I have never seen one in a shop until the other day.

And there were a couple of novels by recently departed mystery writers. 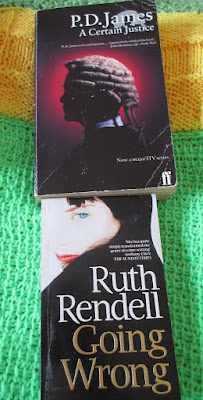 Maybe I should save Miss Read for next week. There may be a fete in one of the novels, so I can go to our local one and compare notes :-)

Simple excitements in my simple life--just the way I like it!
Share
Posted by Shari Burke at 4.8.16