I was starting to think I would NEVER finish this pair of socks, so I was thrilled when I wove in the last end. 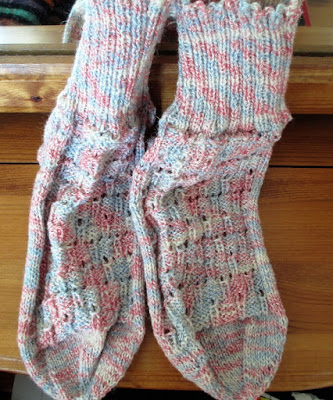 I started these months ago, at the beginning of summer. I made them for our daughter and I plan to post them tomorrow or Monday. The yarn is a cotton/wool/nylon blend and the lace pattern on the top of the foot is one I adapted from my stitch dictionary, where the author called it 'heavy rain.'

It started out well on sock number one--I cast on, knit the 2x2 ribbing, did the heel flap and heel turn and started on the gussets. Here is where things started to slow down. I knit my socks using four double pointed needles--three needles holding the stitches and one working needle. Having tried other methods, this remains my favourite. This means that when doing the gusset decreases every other round on needles one and three, I was also trying to keep track of where I was in the 12-row lace pattern on needle two. This required attention and all too frequently this summer provided me with days in which attention and that kind of focus was simply beyond me.

This has been a bad summer for allergies of various kinds--worst I have had in years and a lot worse than anything I experienced in my previous two Irish summers! Even with allergy meds I have had many days when I was simply unable to function normally-- there was plenty of the usual congestion, sinus pressure, lack of sleep and all the things that are a part of my summers. There were also a whole lot of days in which I experienced brain fog, general achiness, queasy stomach, and a weird inability to keep my eyes open. Light bothered me more than it usually does. Concentration was impossible. These were not the days to be keeping track of gusset decreases and lace patterns, so the socks sat in my little bag by the bed for weeks at a time. It was starting to bother me, seeing them there, and I started to wonder whether I would be able to get them finished and in the post before summer was over.  When I felt good, I worked on the sock and eventually got the first one finished. Then I repeated the process for the second one. The other day I decided to make a dash for the finish line. I did have to tink (knit backwards, or unknit) one row, but other than that, I was able to enjoy the knitting once again.

I am hopeful that the worst is behind me for this year. I have been able to stop taking the allergy meds. I was curious about how I would feel today, having gone out for a longer period of time yesterday. Things had gotten to the point where I knew that if I spent a lot of time outside, I would pay for it the next day, which I would pretty much spend in bed. I am OK today though--no brain fog, body aches, pain or pressure. I can still feel the scratchiness in my sinuses and throat, but I can deal with those things.

Maybe the transition out of summer and into the good time of the year has begun. I hope so.

Maybe I'll cast on another pair of socks.
Share
Posted by Shari Burke at 25.8.16