Tilting the Jar, Spilling the Moon

I was browsing the library shelves a couple of weeks ago and came across this book. 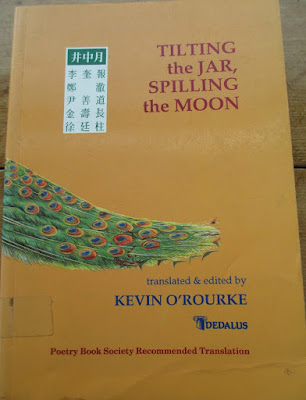 It is a collection of old Korean poetry in translation. Not having read anything like it before, I was intrigued and checked it out.

The editor/translator provides an introduction that covers some of the forms of this old style of Korean poetry and a bit of biographical information where possible, although there is a section of anonymously written poems. These are brief, but good overviews. These poems would have been written in Chinese characters and other regional influences are plain as well. Most of these are short and contain some references to nature--similar to haiku from the Japanese tradition, although the structure of these poems was based on character lines and not syllables as in haiku. Buddhism makes an appearance in one way or another in several of these poems as well. It is a good little book and I learned some stuff by reading it--always a good thing.

These were my two favourites from the book. The first is by Yi Kyu-bo (1168-1241) who was apparently a bureaucrat and someone who frequently over-indulged in wine.
A mountain monk coveted the moon;
he drew water, a whole jar full;
but when he reached his temple, he discovered
that tilting the jar meant spilling the moon.

The other is by Chong Ch'ol (1536-1593)--someone who was considered brilliant, stubborn, and controversial during his life and career in the military and government.
Why does that pine tree stand
so near the road?
I wish it stood a little back,
perhaps in the hollow behind.
Everyone equipped with rope and axe
will want to cut it down.

This is one of many reasons I love libraries.You never know what pleasant surprises are just waiting for you on the shelves!
Share
Posted by Shari Burke at 30.8.16