The Spaces in Between and The Ends

As I was writing my blog post about using scraps the other day, I glanced up and saw my scrappy shawl folded on top of the wardrobe. I realized I had never posted it because I did not have a pic of the whole thing. I asked Bill to take one this morning. 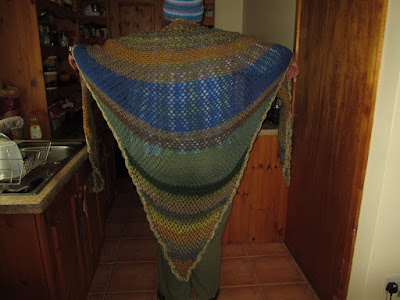 I made this earlier this year when we were still in Killybegs, but knowing we were coming to Moville. It was an in-between sort of time. I made it out of many scrap balls that came from charity shops or that were left from other projects--all acrylics or acrylic/wool blends. It was a good project to work on during that transitional time in my life. It is the same mindless lace shawl that I have written about before (tutorial here). It is very meditative to work on and that was a good project for such a time. I did not join all of the balls together ahead of time, but I did use the Russian join to attach several of them at a time. I joined the smaller balls into larger ones, picked up my hook, and crocheted happily away. At the end I did a shell border and just had one end to weave in--yay!

I like to use the Russian join for lace projects when possible because it's better than trying to weave in a bunch of ends in an open stitch pattern. I also find it useful in knitting projects where I will be having yarn changes randomly in the middle of rows. If you are unfamiliar with the Russian join, here's a short video that shows this very useful method.

If I am doing a crochet project without lots of open spaces in between stitches, I will usually just tie the yarn ends together before winding the smaller bits into a larger ball because I can easily weave the ends in when the project is done. I did that with a bunch of small scrap balls of sock yarn, making two scrappy balls, which I then used to make a pair of scrappy socks (crocheted, toe up), which I wear all the time--they have held up well. Some of the colour changes are happening in each kind of sock yarn and some is just where one scrap balls ends and another began.

Sometimes I do nothing with the ends at all and I call them fringe. 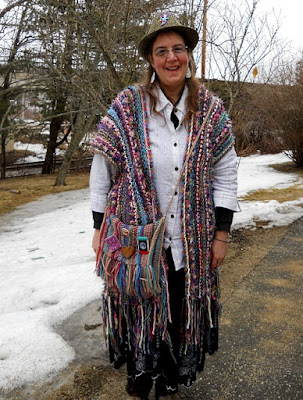 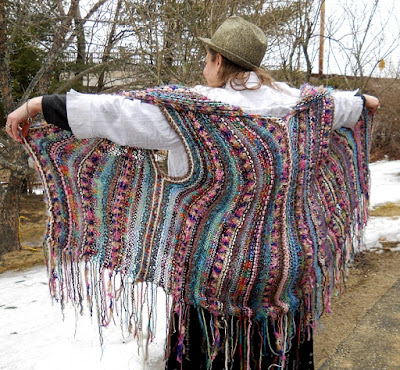 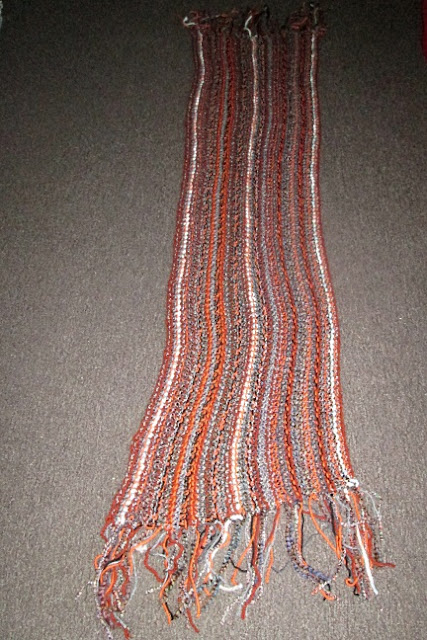 If I just have a little novelty yarn, I use it by itself--making as many chains as I can, closing into a ring and looping it around my neck a few times like a necklace or around my wrist as a bracelet. Or I might cast on a bunch of stitches on circular knitting needles, bind off, and use the tails to sew the ends together and attach a glass bead. 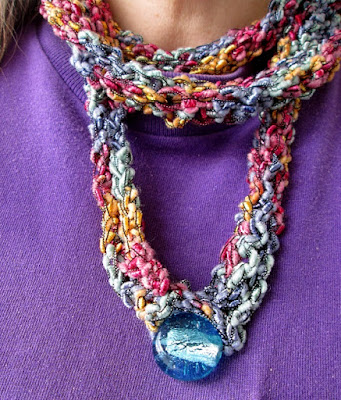 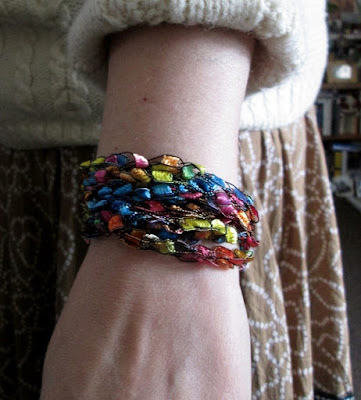 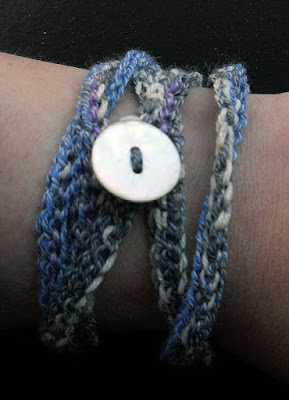 In my previous scrappy post I also mentioned doing abstract cross stitch with thread trimmings. Sometimes I use the trimmings for a piece that is not abstract. I guess one reason why I like working with scraps so much the enjoyment I get out of looking at a small ball of yarn or a short piece of thread and figuring out how to use it instead of throwing it away. There is something satisfying about that for me and I am always happy when I see the scrap pile growing.

May your weekend be creative and peaceful.
Share
Posted by Shari Burke at 20.8.16