The other day I finished reading The Mandibles by Lionel Shriver. I loved the book. The Guardian published a review earlier in the year, so I refer you to that rather than rehash plotlines here. 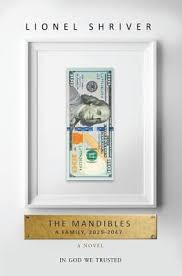 Briefly, the story opens in 2029 with the dollar collapsing and continues on exploring the aftermath of the crisis through the eyes of the Mandible family. I love stories where some event, whether cultural, societal, or natural, disrupts life as people know it and force them to examine their world and to recreate culture and social institutions and structures. Most culture change happens due to some sort of disruption, partly because this is what causes people to open their eyes and look at things differently.

The story was very plausible to me--in fact, I could see some of this stuff happening already. There was a lot I liked about the book, but what struck me the most was how much people were not paying attention, even when things started to collapse. One boy, who was 10 or so when the story begins, was the only person to correctly read the information that was there and the cultural changes that resulted. everyone else was caught up in old stories about the way things used to be. They denied what was happening before they moved into denial about what was coming. 'That will not happen. This is the United States.' or 'That country would not treat us this way. We are the United States.' They were so invested in and blinded by their belief in the USA as an exceptional, respected, powerful superpower that they were unable to deal with the world as it was in their present day. This is always dangerous. The world changes. Empires rise and fall. International relationships are not static. Within countries cultures, societal institutions, and attitudes change and these things have an impact on relationships between countries. Reality is constantly shifting. Clinging to a mythical past does not really solve problems, but it does allow people to get away with stuff and it prevents people from usefully responding to problems both big and small.

In spite of what may seem like a bleak scenario, there was some humour in the book too and I found myself laughing at times. Shriver is an excellent writer and storyteller and she is very good at a kind of dry wit. I was especially amused by the hapless economics professor who clung to his theories no matter what. Fortunately for him, he had some reality based people around him to help him navigate.

Since we have moved to Ireland I have become increasingly fascinated with the ways in which the cultural stories about the past differ from those of the US and how these stories still have quite an impact on the cultures today. This book fits in with that, which may be one reason I enjoyed it so much.  It did take me a few pages to really connect with the book, because economic details are not really my thing. Once things became more about the culture, society, and people's responses, I was hooked.

It is an entertaining story, but it can also serve as a nudge to all of us to pay attention and to not settle for easy, surfacey answers. The world is not the same as it used to be. We can help to direct the inevitable changes or we can deal with them after they are thrust upon us, but one way or another, we will have to engage with how things are instead of how we would like them to be or how we think they were in some mythical glorious past.

Oh I really like Lionel Shriver! I just requested this from my library. Her book, "We need to talk about Kevin" is on my shelf, part of my "permanent collection." She's a great writer. Thanks for the recommendation!

We found We Need to Talk About Kevin in the wee free library and I picked it up. Have not yet read it--trying to read my library books that always seem to come in at the same time :-) Happy reading!!