Lunch, Lace, and a Game of Thread Chicken

Decided to pack lunch, lace, and my water bottle into the backpack today and go hang out by the water for a while. 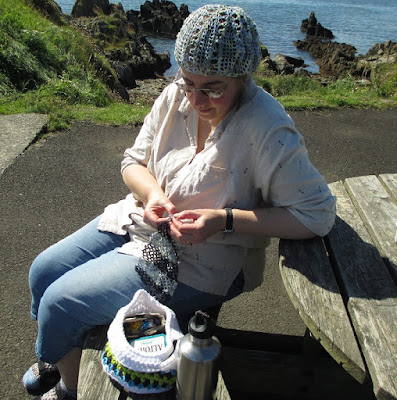 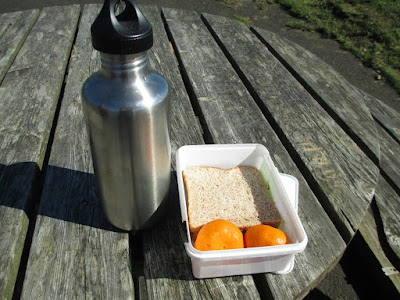 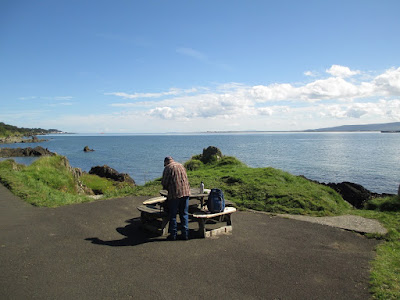 That project bag is perfect for tossing into the backpack when I want to stitch on the go! It is the perfect size--not too bulky but holds all my supplies. My friend, Karen, made it for me and it has come in very handy!

We'd stopped along the way to fill our water bottles from the well and the water was nice and cold. We sat for a while, chatting, munching, and enjoying the view. 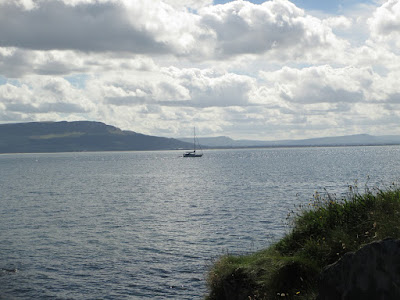 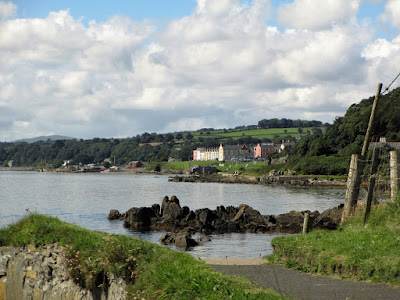 There were a lot of people out today--the sun is out and that gets people here excited. There is less than a week until the kids go back to school, so I imagine that was another good reason to get them down to the green to run off some pent up energy. There were some folks who came to walk the path and some who just went to the green or a bench by the water to eat their lunches. We decided to go down the path instead of staying near town so we could sit and listen to the water gently lapping against the rocks.

We had a nice, quiet anniversary yesterday and Mother Nature decided to give each of us a little something. In the morning we went out in the misty drizzle to call on fruit and veg man and get our produce for the week--he sets up his stall on Tuesdays in Market Square. Later on, Bill suggested we go get subs at the little shop in town. It is called Catch a Sub, but it is not just a sub shop--it is also a coffee shop and has the normal takeaway stuff, like fish and chips, sausages, chicken, and stuff. It looked like a sort of hole in the wall when we would pass by, but there is actually a nice little dining area inside.

The weather was changing by the time we left to get our supper. 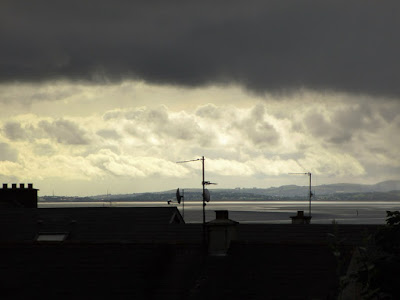 A couple of hours after supper the sun was out and we decided to get an ice cream, so we went to the little grocery store and picked something from the freezer case, taking it down to the water to enjoy there. Ice cream is a big thing here and there are a few places in town to get scoops of it, but we wanted something smaller, so opted for the grocery store. Then we walked to the pier and spent a bit of time there just looking at the water and the changing light.

Last night I picked up my ongoing patchwork tatting project and worked on that. I was using the bit of thread that was left from a hat I made recently and decided to play a little game of thread chicken. I was not sure whether the small ball I had left would be enough to do another row, but decided to go for it--if I ran out I would not be bothered about finishing with a different thread. I made it to the end though :-) 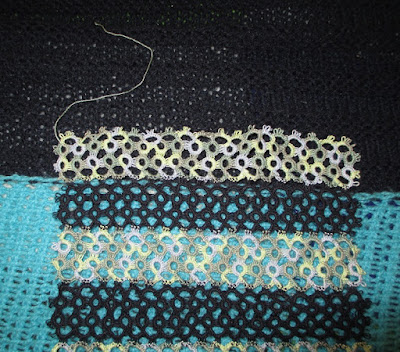 Tonight we are going to the library to hear a guy talk about local food as part of Heritage Week. I think he is an expert of seaweed, so should be interesting. I hope so, anyway! Guess I will find out!
Share
Posted by Shari Burke at 24.8.16