Bill and I both like chicken pot pie, but Bill is not a fan of pie crust, so I make this chicken pieless version instead. 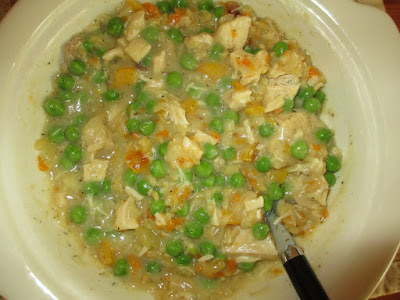 As with everything else I cook, it is a little different every time. The ingredients are basic, so I had them around and when I found myself with an unexpected chicken, I was able to use some of it for this.

We went into our little grocery store on Main Street the other day and discovered large whole chickens for 4 euro, which is a very good price. My tiny freezer compartment is stuffed full so I could not buy one for the freezer, but I did pick one up to cook that night. We pay for electricity at different rates--peak time is 9 am-midnight (it will be 8am-11pm once we go back to winter time) and the rates are cheaper during the off-peak hours. I stuck the chicken in the slow cooker at midnight and cranked it up to the high setting, leaving it to cook overnight. In the morning I let it cool a little and got all the meat off the bones.

This always creates liquid in the crock of the slow cooker, which I pour off into wide mouthed jars (salsa jars here are short and wide--very handy for re-use). Once chilled, the fat is solid at the top and can be scraped off. I use what is left to make gravy, which I start with olive oil and onions in the pan. This time I also used some finely chopped yellow bell pepper. Once the onion was translucent, I added some flour and incorporated it well, then I added the drippings and a bit of water. Once that was thickened I added black pepper, frozen peas and chopped, cooked chicken. Sometimes I also add cooked potatoes and carrots. This time I had whizzed up some carrots in my little chopper and added them to brown rice when I cooked that, so they were already in there. We have the chickenand veg gravy over the brown rice instead of having it in a crust.

Before I made this, I'd used part of the chicken in a Mexican mac and cheese bowl kind of thing. We'd felt like having mac and cheese for dinner one night so I made that--and we had cheese sauce left over. Later that night I cooked the chicken, so the next night I added some cooked chicken, a can of chilli beans, and some chopped tomato to the cheese sauce and we had that over pasta. I'd have used some corn too, but I did not have any. I could have added salsa to the sauce as well and that would have been excellent.

We got a lot of mileage out of that chicken--three suppers and two lunches for each of us. Love my slow cooker!
Share
Posted by Shari Burke at 18.8.16

That all sounds totally yummy. I often make spinach pie and when that leaves me with leftover phyllo dough, I make a chicken pot pie with phyllo dough for the crust instead of a traditional crust. I like your idea of the mexican mac and cheese. May need to incorporate that into my meal plan for next week!
Cheers,
Dana

Phyllo dough is a great idea. Lots of that here. The Mex mac and cheese works well with or without the chicken :-) Hope you're having a good day!