A Piece of Pottery and Upcycling

In my collection of beach finds, I have many bits of pottery and tile. We even found a whole tile one day, but most of it is just little bits. Some of this is plain, some has a fragment of a design, and one or two have been broken in just the right place so that there is a discernible design on the fragment. I had an idea for one such piece yesterday. I knew I wanted to make the pottery fragment the focal point of the piece. I dug around in the fabric stash--I have a lot of yardage that was given to me by a friend. It is beautiful, high quality fabric and there is so much of it that I am saving this for a larger quilt. For these small pieces I use either very small scraps or clothing that I have picked up at a charity shop for the fabric/buttons. I rummaged around and pulled out a few black and white pieces. I opted for a skirt that I got in a Ballinrobe charity shop in the euro box. The waistband is stretched out, the belt loops are ripped, there is no belt, if there ever was, and it had a hole in it. I guess that is why it was a euro. I cut that up and sewed 4 layers together. Because the pottery piece was a little heavy, I did not want it to pull or flop around. But it was still too floppy and I have no batting, so could not layer some of that in there and do some hand quilting. No idea where I might find batting here and since I am always trying to think of ways to avoid buying new, I decided to set the project aside and think about it. Last night, I figured out a solution for this project and one for future projects. For this one, I simply cut a piece of heavy, acid-free watercolour paper that I had. I cut a piece slightly smaller than my square of fabric layers. Then I cut a slightly larger piece of fabric to use as a backing, did a fold-over binding, and sewed 3 sides of that. Before I sewed the 4th side, I slid the watercolour paper in. It gives it the sturdiness I wanted. Then I cut a bit of the skirt hem into short lengths, folded them over, and sewed them on as loops. I cut a couple of pieces of net that peaches came in, layered that on top of the small fabric piece and then sewed the little piece of pottery on top of that. A small piece of driftwood through the loops finished it off. I am quite pleased. 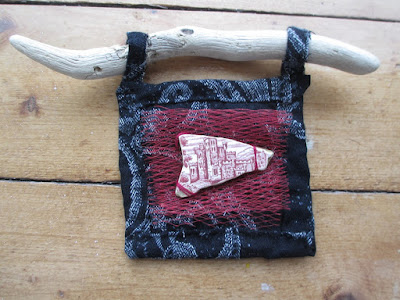 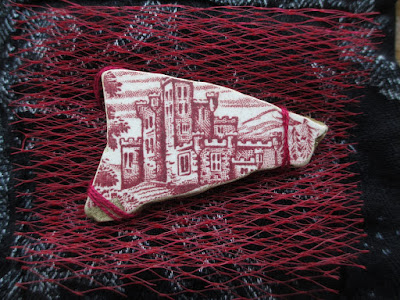 As for the longer term solution, I remembered a stiff, heavy sweatshirt that was hanging on the euro rack at the charity shop here. I thought that would do the trick as the middle of the fabric sandwich on future projects, so after lunch when we were going out for a walk, we called in there--the sweatshirt was still there so I bought it. I do not care about the hole in the back of it. I will try it out on the next project. I can keep my eyes open for more such garments, but this one should provide enough for several pieces as it is a size XXL.

It is bucketing down as I type--yay! I have been limiting my time outside because the weed pollen is high and I am having a particularly rough time at the moment--the last few weeks have been frustrating. But it was a good day for a walk today. We'd gone out before lunch and while Bill went to deposit a check at the bank, I went down the hill to leave a book at the wee free library. I LEFT a book and I did NOT take one (yay, me!). I probably should not mention the 5 books we got at the charity shop today. They were 5 for a euro and I look at them as future donations to the wee free library.

While I was down there, I noticed how excellent the day was for a shore walk--pretty breezy, spitting, not too hot, and cloudy. 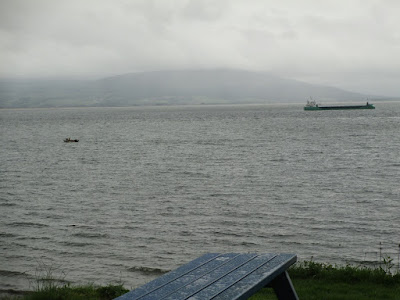 We were getting hungry, so I met Bill back up on Main St and we went to the small grocery store for a few things. Then on the way home we stopped to pick up some stuff from fruit and veg man, after which it was home for lunch and then back out for a walk.

By then the sun or something like it had started to shine down on one patch of ground on the Northern Ireland side: 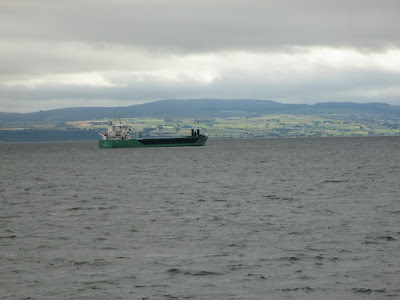 Not so much south of us though: 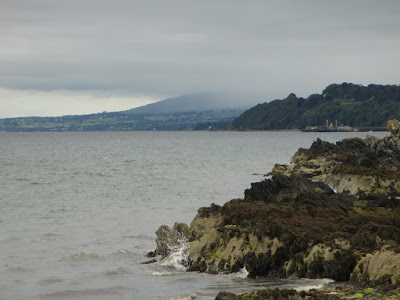 Still breezy enough to cause the water to be choppy--sounds so soothing as it hits the rocks: 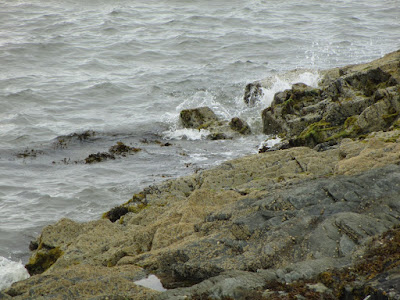 Good day for a sailing lesson: 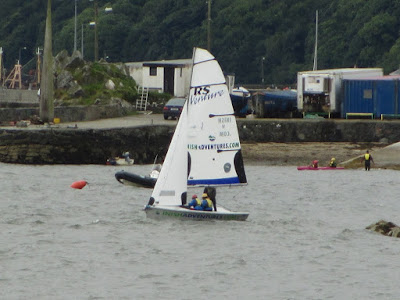 And for this seagull, riding the waves: 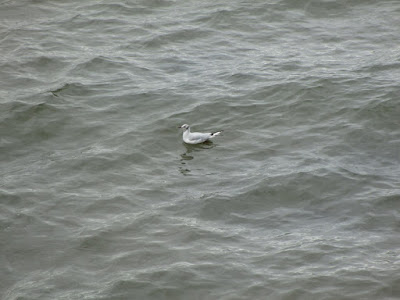 It was a nice walk--and we picked up some more treasures on one of the small beaches. I have some ideas for some of it already :-)

Hope you are having a creative Tuesday in beautiful surroundings!
Share
Posted by Shari Burke at 2.8.16

Nice. That's great! Your husband gave me the link to your blog.
Yes, this is interesting for me.

Thank you, Jedidja! We have found so many interesting bits on the beaches and I enjoy using them. Bill says you create things too.