Experimenting with Linen, Cotton, and Shells

The breeze has returned. The sky is once again many shades of grey instead of blue. Wet stuff has fallen from the sky--just a little. It is 20 degrees (C) cooler than it was yesterday. Hopefully that will be the end of 80+ degrees.

It stayed nice and cool inside for most of the day yesterday. We dashed out to get some fruit and veg from the guy who sets up in Market Square on Tuesdays. We were home 10 minutes after we left and it was great to feel the difference in temperature when we walked into the building--so much cooler inside than out. All of our places here in Ireland have stayed pretty cool in summer--gotta love these really thick concrete block walls!

By last night it was a little on the stuffy side, but I just stayed up until I was practically asleep and occupied myself with various things. I hate going to bed and tossing and turning so by waiting until I was almost asleep already, I avoided this.

While I was riding out the miserable heatwave (can a couple of days be a heatwave?), I played around with some ideas using shells, rocks and thread. I ended up with a piece that got cut apart and the rock saved for something else, but I was pleased with the shell pieces, so I kept them. I am wearing one now, in fact. 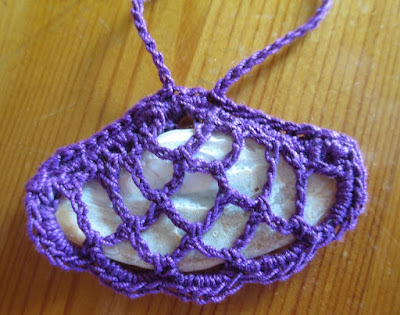 I tried a couple of different things with the shell piece, which we picked up last week, but I ripped them out and tried again. I liked this one so decided to keep it. 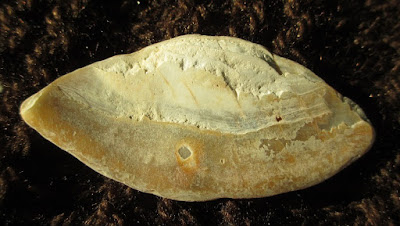 We have had the shells in the piece below for  a while now and they seemed to work well with the larger motif, which is made out of 4 strands of linen thread held together. 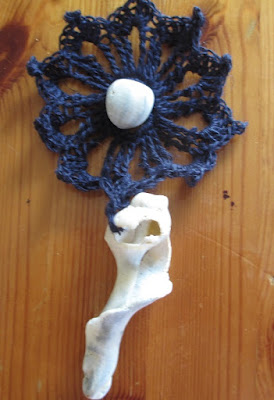 I think there is some potential for the pendant idea and I will probably play with that further.

Bill went out for a walk last evening and brought home a nice orangey shell with a hole right at the top. Often when we find shells that look interesting they are very fragile and break easily. he said he dropped that one on the footpath and it did not even chip. That's good. No idea what I will use it for, but I am sure it will become something.