I am working on a biggish project using thin navy blue linen thread and some brownish and gold thread--there is a metallic thread wrapped around the core. The linen came on a huge cone and there are thousands of yards. I am winding it into balls to make it more manageable. The metallic thread comes on small balls and I had a bit left on the cardboard cone when I was done with a square. Usually when I have a tiny bit of thread left I add to my scrappy abstract tatted piece, but this thread does not work well for needle tatting, so I grabbed a 1.5 mm crochet hook and made a circle. I still had some thread so I made another one. I thought they would work as earrings, so I got out some beads and earring wires and made a pair. 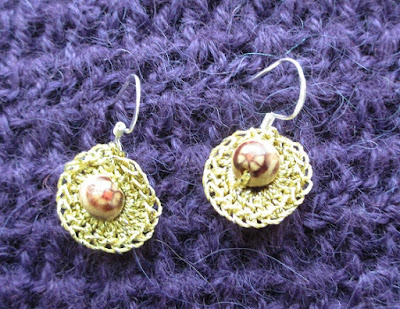 Good way to use wee bits!

Yesterday we called in at one of the charity shops down the lane from us. They always have a rack of clothes at the front of the store and everything hanging there is a euro. The first time we went in there I found an old sweater for me to knock around in, but usually I just look through the offerings to see if there is any interesting fabric. I picked these two yesterday. 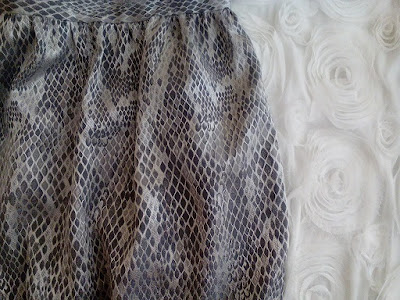 It doesn't show in the photo, but the grey bits of the strapless mini dress on the left have a metallic sheen to them. The white shirt is nylon or something like that and an interesting texture. I was drawn to these two because together they make me think of winter and I could feel the beginnings of some ideas for a project using them together. Later mountains came into my mind. Eventually these ideas will gel into something coherent.

Even better, both of these garments are lined, so there is the outer fabric as well as the lining fabric to use. The shirt lining is white and the dress lining is bright pink and will work well with some other fabric I have. There is also a sort of waistband, which I am sure will be useful.

When we were in the book room (all books 5 for a euro) Bill spotted a nice German-English/English German dictionary, which also came home with us. This will be very helpful in my ongoing leisurely study of the language. I took German classes in high school, but then got married, became a mother, and, when I started college at the time our daughter started first grade and I was in my mid 20s, I started doing other languages--studying, substitute teaching and tutoring. I did Japanese for a few years, Spanish for a couple, and eventually Inupiaq Eskimo enough to earn enough credits for a degree. I did not bother to file the paperwork for this, since I did not feel I needed that particular piece of paper, but I could have had it if I'd wanted it. So German is not new to me, but it has been many years and this is the first time I am studying a language in a non-academic setting. All of the online resources make this easy for a language like German. Since some of my work with Inupiaq involved language preservation, it has been interesting to me to see how the various programs are set up.

Between projects in progress, ideas for future projects, and the books that keep on finding their way into our home, I could fill many more hours each day. I am never bored! It does make me appreciate the fact that I have created a quiet, slow life in which I can engage in learning new things, exploring ideas, and being creative. I do not have as much time as I would wish sometimes, but I do have quite a bit more than I would have if I had not consciously set out to create this kind of simple lifestyle.

Hope your Wednesday is peaceful and creative.
Share
Posted by Shari Burke at 29.6.16