For several years now I have noticed stuff on the sidewalk and sometimes picked it up to use in some project some day. I have a small container full of little bits of stuff. Metal washers are pretty common on sidewalks and they work well as small hangers for little pieces of wall art/stitchery. Many people must lose their earrings as well, because I have found some nice single earrings through the years that I have used as embellishments on sun catchers, ornaments, and wall pieces. Sometimes I leave them as they were found and sometimes I take them apart. Bill brought home a nice one the other day and I put it away for future use.

Now that we are always walking along the shore and poking around beaches, our found object collection is growing rapidly. I have some vague ideas for some of the larger pieces of sea glass we've collected and for some of the shells that have holes in them. Some of the small bits of driftwood will probably be incorporated in the latter project as well. I love the little pottery shards with their varied designs and I have those stuck all over in plants or propped up against a plant pot. Some of the pottery bits are bigger though, such as this one: 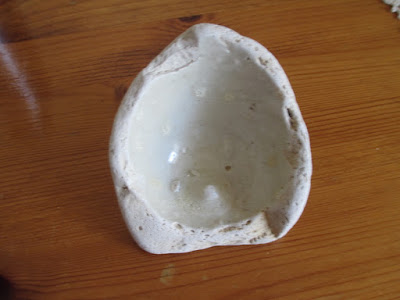 The first thing it reminded me of was those grottoes you see that have statues of Mary in them--we have seen many since we have been in Ireland. But that is not really the kind of thing I want around, so I decided it could also be a chair. I made a round purple person to sit in the chair. 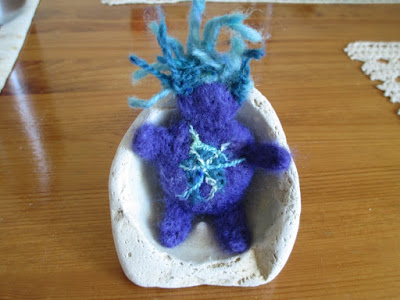 She is needle felted and is the second attempt at something I liked. I crocheted something last week but did not care for the end result. I liked her so decided to keep her. Making her also led to a few new ideas that I hope to try out soon.

Several weeks ago Bill brought home a small rock with a hole through it. He said he saw it and knew that I would want to make something with it. He was right. 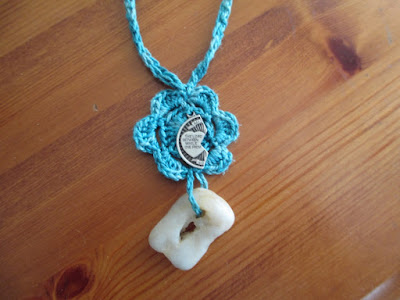 The metal piece in the middle needed a new thing to hang from. The chain was gone long ago and I have been making something to hang it from ever since and wearing it until it wears out. Then I make a new one. Sometimes I wear it around my neck and sometimes my wrist. Bill wears the other half. His chain is fine. Anyway, I decided to combine that and the rock so I crocheted the flower out of perle cotton and used the starting tail to sew on the pendant.

My current work in progress is a cotton hat for Bill. Now that summer is here he wants a more lightweight one or two. I am also still working on the crocheted lace shawl, although I have not picked that one up in days. Today got away from us somehow so I have only knitted a few stitches so far.

The netbook I have been using for writing, photos, blogging and stuff has been letting me know it is running on borrowed time. It is almost 7 years old--I have had it for 3 or 4 years now. A friend sent it to me when we were still in Maine. The people she bought it for were not using it so she asked if I wanted it. It has worked well over the years and it is too bad it is gasping out its last breaths! The screen flashes with black stripes of varying widths and the keys are starting not to work. Bill found a very basic refurbished netbook for a good price so he bought it and it arrived today. We thought it was going to get here, but then the tracking site said that as we were in a 'remote area' it was unclear when it would be delivered. But that shipping company handed it off to An Post and they got it here today. Between waiting to see if it would arrive and then trying to get it up and running with anti-virus and some basic apps, it took a good chunk of the afternoon. It has Windows 10 on it and my old one has 7, so there will be a learning curve there. It is a UK keyboard too, which is interesting! I dislike the process required to set up new computers to the way I want.This is partly because the way I want it is the way it has been and a new computer means change I find tedious--at least until I get used to the new system. I think I will take it a little at a time. I do like the solitaire options though, I must say! It is just possible that a little bit of time was wasted this afternoon as I learned a new solitaire game.

Later we had a delivery of the new battery Bill needed for his laptop--his died the other day. And he also got his brand new EU health insurance card. I found out that EU citizens are entitled to this when I was reading a news story a week or two ago and told him about it. He went to the website, filled out the form and it arrived today. It entitles him to free healthcare in EU countries and those outside the EU but are a part of the European Economic Area. It was so refreshingly simple!

Well, I guess I will go make coffee and knit. Or mess with computer stuff. Or read. Or maybe I will play solitaire!!
Share
Posted by Shari Burke at 1.6.16