We had a heatwave a few weeks back (it was approaching 70--we no longer do well with this kind of thing). This made me grumpy, of course, but it put Bill in mind of new hats. We were walking along the shore walk and he kept saying, 'I need a lighter summer hat!' as he wiped the sweat from his poor head. The man does know how to cheer me up! I reminded him that, a year and a half ago and back in Ballinrobe, he decided he liked a lightweight summer hat I had made for myself out of scraps and requested one. He asked me to find various suitable yarns online, which was the only place we could get yarn at that point, send him links and he would choose. Happily for me, he chose cones (of over 800 yards each!) in a nice green and a nice brown. Since the hat would require a small fraction of that, I knew I would have leftovers--you know how I love leftovers! The yarn came. I asked him whether he wanted a roll brim or a ribbed cuff. He could not decide. He went down with shingles. The cottage in Killybegs became available. We moved to Killybegs. The summer was chilly. He forgot about the hat. I kept on making other stuff.

So when summer showed up this year and he requested a hat, I told him we had the yarn and all he had to do was decide on roll brim or ribbing. When we got home I took out my hat. He said he wanted it like that. I had him try it on for fit. He liked it as it was. Since I had written down the pattern as I made my hat, it was right there in my small notebook. Got out the yarn, the appropriate needles, and got to work. When that was done I made him a backup using part of a skein of sock yarn in a cotton/wool/nylon blend--when one needs to be washed, he will have the other. 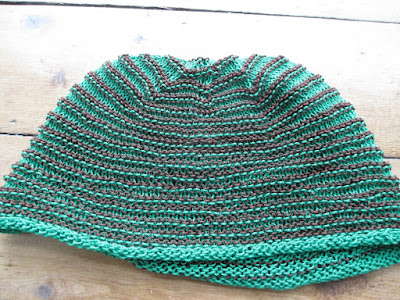 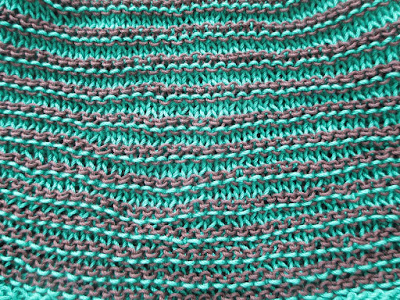 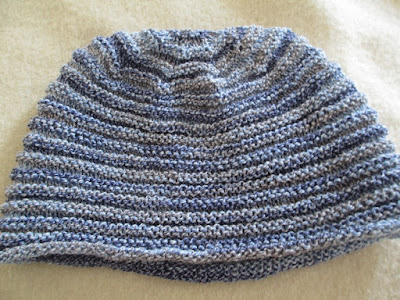 It is a simple knit and although I used sock yarn, it could easily be done in a thicker yarn with bigger needles--you would just adjust your cast on accordingly.

sock/fingering weight yarn--I used less than 200 yds--I have made this hat in cotton, a cotton/acrylic blend, and a cotton/wool/nylon blend and all have come out well and are comfortable to wear

I carried the unused colour up the back so I would not have as many ends to weave in. You could cut the yarn at each colour change if you'd rather. You could also carry the main colour and make every ridge a different colour. Also works well with solid or colour changing yarn. To make a tighter brim, you could do some ribbing to start and then begin with the pattern.

Cast on 110 stitches and join, being careful not to twist stitches

With colour A, knit a round and place stitch marker, if you want. Knit 6 more rounds with A. Do not cut yarn.

With colour B, purl for two rounds. Drop B, but do not cut.

With B, purl 2 rounds

Repeat until hat is as tall as you want it from brim to crown, ending with 2 purl rounds. I ended after 13 purl ridges.

For crown decreases (switch to dpns when necessary to work comfortably around):

Rnds 7 and 8 and all purl rounds: work even in purl

Last two rnds: k2tog around then knit around.