Today's needle tatting experiment is finished and I am pleased with the results! I see potential here for using found objects in somewhat larger, collage-style pieces. 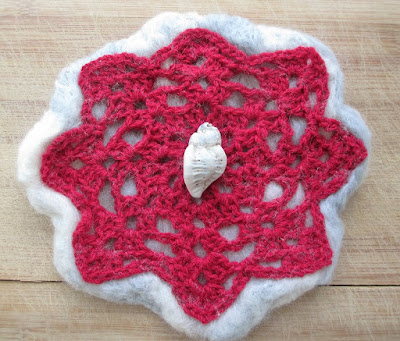 Years ago when I first needle felted I did so almost exclusively to make abstract designs in various shapes to use as frames for Bill's photos that we printed on cloth. I loved how I could layer the colours and play around with them to get the effects that I wanted. The felt could be easily cut, so I would cut out a piece from the centre and sew in the photo. These were hung in various ways. Some were hung from tree branch sections that were interesting shapes. My favourite was a felted background created in deep purples and magenta (as I recall) with a close-up of a purple flower in the centre. This was attached to a large wooden hoop that I had gotten at a yard sale. It hung in my kitchen, but did not make the move east when we left Oregon. I am bummed that I cannot find a photo of this piece. I am sure we must've had one, but at the moment the file remains hidden somewhere!

Here I am years later playing around and stabbing fibres into felt once again and I find that I still like making these kind of abstract pieces of cloth best of all. Hard to see in the experiment above, but this time I used white and grey for the background. I knew that it would be mostly covered by the piece of lace and wanted it to be a contrast. I deliberately left some spots in the felt thinner so a little bit of light would come through. Once I had a firm enough piece of felt-in-progress, I attached the lace motif, which is crocheted out of a fingering weight wool yarn (found at a charity shop), by continuing to stab away--it felted onto the background.

I started with a rectangular piece with uneven edges, then felted it into more of a circle, but it wasn't working for me, so I felted in the indentations between the pointy parts of the motif. Then I liked it so I went on stabbing until it was done to the degree of firmness I wanted.

I poked around in our collection of found objects from the beaches around here and tried out a few of them, settling on the shell. Then I dumped out my container of found bits of hardware and took this nut to sew on the back as a hanger. 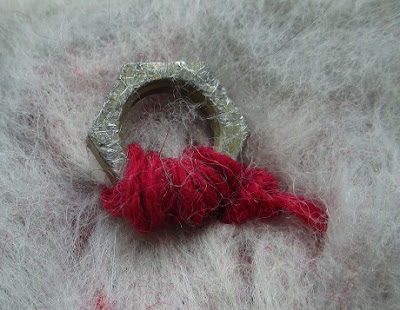 Just after I began this morning I broke my first needle. Fortunately, it was one of three starter needles that came in the kit, so I have two more. There is no reason I could not start with any of the other needles--they will all make felt--but the barbs are situated differently on the different needles and I switch as I go along and the piece progresses. Glad I still have a bunch more needles since I will be curious to see how a thicker and firmer piece of felt would work with some of the larger and heavier found objects that we've collected. Might be a good idea to get some spare needles though, just to have around!  Love my wool in all it's forms :-) Thank you, sheep of the world!
Share
Posted by Shari Burke at 16.6.16