A couple of months ago, Bill and I walked to the nearby garden centre to pick up some dirt (called 'compost' here) and some herb plants. When we got home I repotted the herbs and planted some mizuna seeds. Later I planted garlic for garlic chives, scallion ends and a fennel end--I had bought a fennel plant, but I already had the bulb and wanted to see whether the end would grow new shoots like scallions and celery. I am seeing a bit of growth.

There was no rosemary at the garden centre, which I was hoping to get. Happily, a few weeks later when we went to the fruit and veg man who comes to Market Square on Tuesdays, I spotted bunches of rosemary, so I bought one. I used some, dried some, and stuck a few sprigs in a jar with a little water on the bottom to see if they would root. Before long I saw one tiny root growing out of the bottom of one of them. I left them all there and the roots grew. Today I planted them. 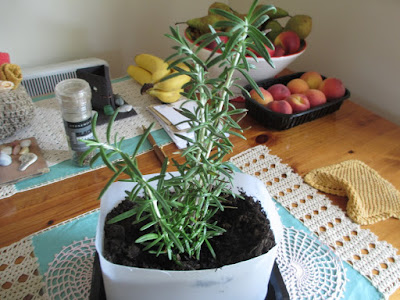 I like rosemary 'tea' with or without lemon, but I also like the plant, so I am hoping this one lives.

I planted more scallion ends today too and separated my chocolate mint plant. I have had to move beyond the window in the landing, which is where I still have most of my little pots of herbs. The windowsills are filling up. 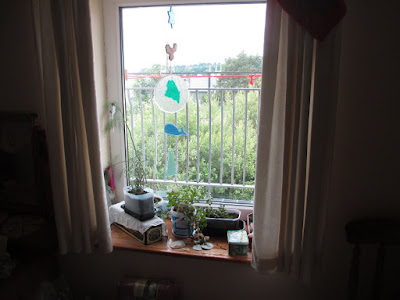 That is the window in the room I use as a study/studio sort of space. It is a small room, but I like it and I like having the plants in here.

I have been using the herbs quite a bit. I use the lemon balm, chocolate mint, and rosemary for 'teas,' both hot and iced. I get nice salad bases too, out of parsley, fennel, mizuna, scallions, and garlic chives. Bill does not like the fennel, but he has dill in his. 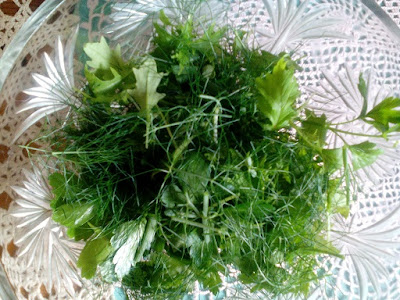 I have a celery end in water and the growth has begin on that. I will have to plant more mizuna seeds soon. We would like to get a few more houseplants for the window in the kitchen that does not get any direct sunlight, but we have not seen houseplants here. We do have a jade plant that a friend gave us, a bromeliad that another friend rooted from a cutting--both are growing like mad--and our trusty avocado plant that I grew from a pit.

Next year we should be able to either get some bigger pots or window boxes for outside the windows. I am thinking strawberries.
Share
Posted by Shari Burke at 28.6.16