The other day while I waited for Bill to be finished with the GP I stood in the little square knitting a hat to pass the time. It was a very convenient carry-along project since it was just two small scrap balls of yarn and the hat in progress on a pair of circular needles--very portable. Last night while I sat in bed and listened to an In Our Time podcast about photons, a Thinking Allowed podcast about sociological research on relationships and HIV in sub-Saharan Africa, and a Guardian books podcast, I finished the hat and wove in the ends. 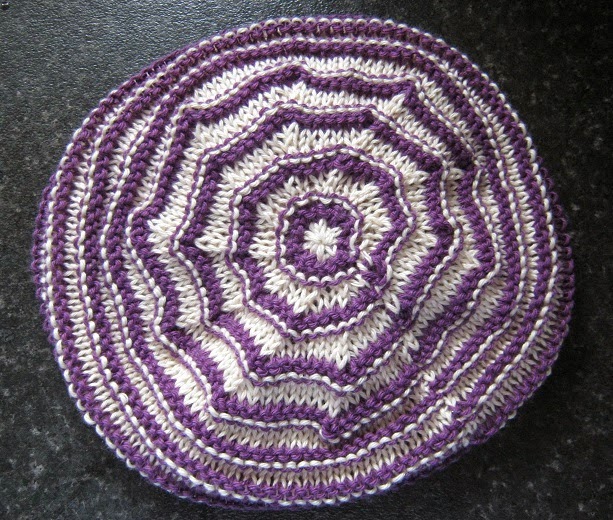 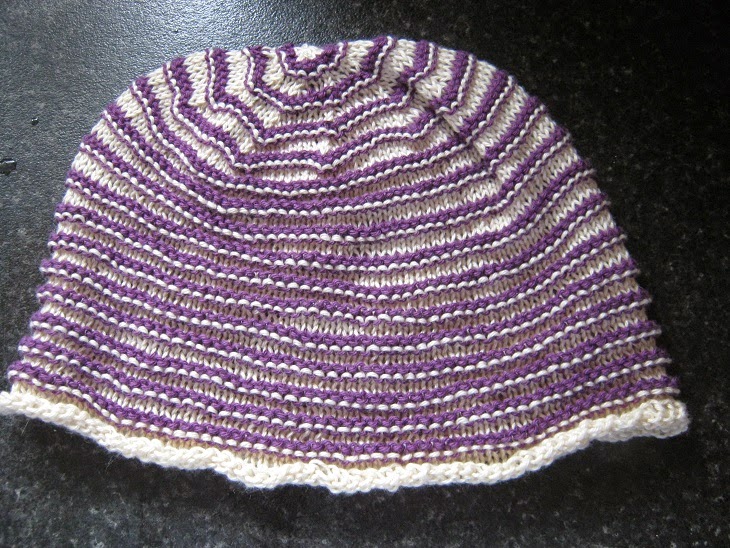 It's made with cotton and acrylic sock yarn that was given to me by a friend when I still lived in Maine. I'd used some of the purple, so had a bit more of the cream. I used size 5 (3.75 mm) needles instead of the 1-3 suggested on the ball band, because I wanted a loose fabric. I'd been thinking about making a hat with the yarn, but was undecided on how I wanted to do it until the other night, when the idea popped into my head. It's a very simple pattern and I am quite pleased with how it turned out. I'll post the pattern below.

There are more flowers every day it seems. I am particularly partial to purple! 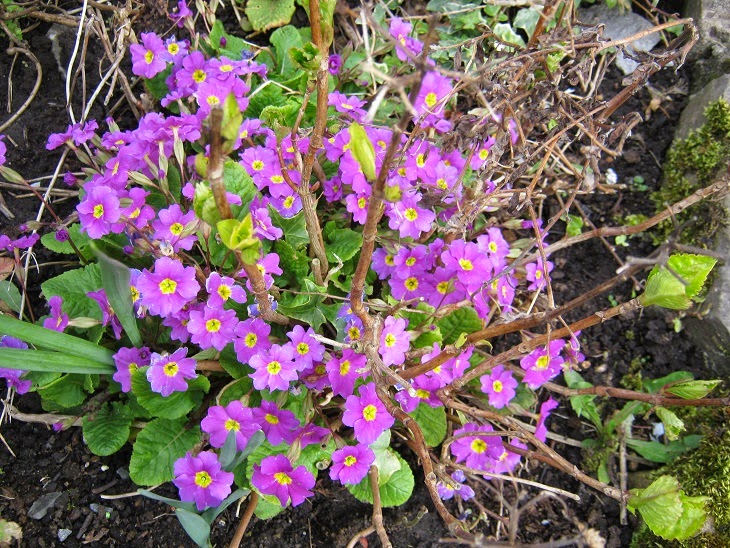 I always think of colourful foliage as a fall thing, but here it is in spring, too: 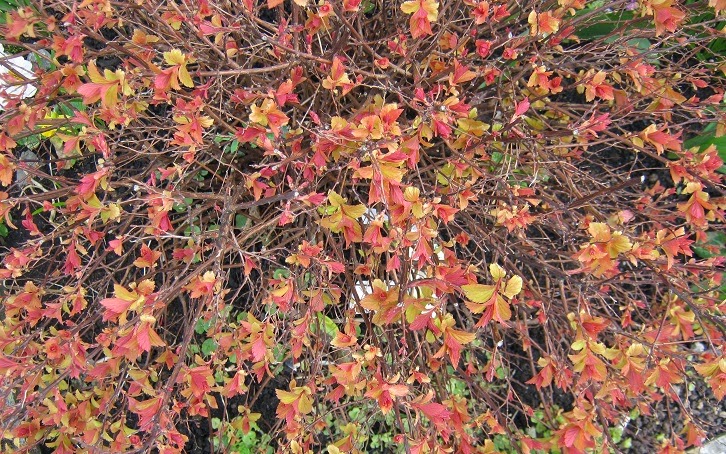 Spring colour is busting out all over :-)

Bill seems to be doing a little better. He has been sleeping a lot since Monday, which is good. He really needed that, since it had been weeks since he got a decent night of sleep. He has some periods of time when he feels OK, but the itching and burning soon return in spite of the medication. I am not sure the pain killers help much, but he feels the Lyrica is helping a bit. It seems clear that the antihistamine is quite effective.

Today we took a short walk to the library. I knew I had one book in because we got the message yesterday evening, so I grabbed some change from our container before we left. Then I decided to grab some more in case any of the other 3 books that were listed as in transit had come in--and 2 of them had! Yay!

Bill says he feels better after the walk and I am always happy when I come home with books, so it has been a pretty good day so far. Hope it's the same in your neck of the woods!

Easy Two Colour Roll Brim Hat
sock yarn--I used less than 200 yds--this is a cotton/acrylic blend, but you could use any fibres
size 5 (3.75 mm) circular and double pointed needles

I carried the unused colour up the back so I would not have as many ends to weave in. You could cut the yarn at each colour change if you'd rather. You could also carry the main colour and make every ridge a different colour.

Cast on 110 stitches and join, being careful not to twist stitches
With colour A, knit a round and place stitch marker, if you want. Knit 6 more rounds with A. Do not cut yarn.

With colour B, purl for two rounds. Drop B, but do not cut.

With B, purl 2 rounds

Repeat until hat is as tall as you want it from brim to crown, ending with 2 purl rounds.

Rnds 7 and 8 and all purl rounds: work even in purl

Last two rnds: k2tog around then knit around.

Dear Shari,
This is such perfect timing. I am in a knitting/crocheting group at work and yesterday one of the ladies was saying she had all this scrap yarn and didn't know what to do with it. I showed her this pattern and she really likes the hat you made so she is going to try it!
Thanks for sharing it.
Dana

Great!! Hope she is happy with the finished results :-) Bill tried it on when I showed it to him this morning (he was already sleeping by the time I finished it) and he says he would like a lightweight hat like that for spring/summer, so I will be clicking around to find an appropriate yarn so he can pick colours. I really wish there was a local place to buy yarn here, but no such luck! I love using scraps--everyone used to give me their odd balls and scraps so I had quite a collection :-) If anything in the pattern isn't clear, tell your friend to feel free to ask!