A Couple Days of Winter

Yesterday morning, we awoke to find snow on the deck. 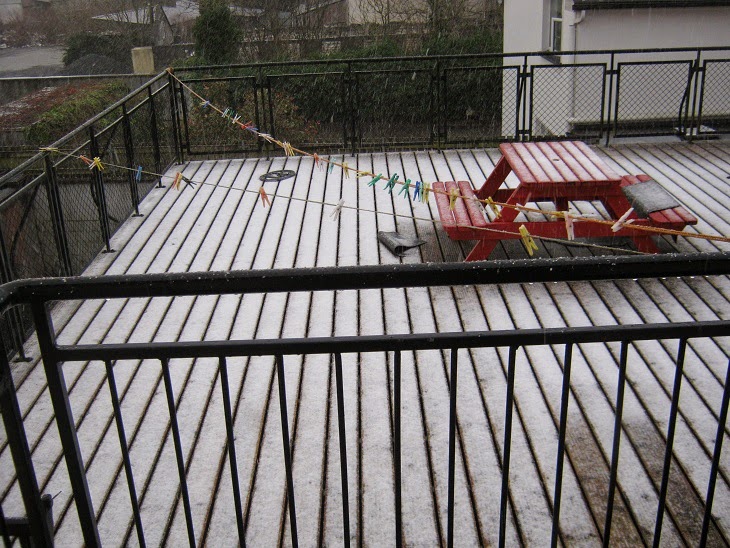 It actually stuck around for a while and more snow fell off and on throughout the morning. This was often mixed with some sleet, but sometimes it was lovely, big, fat flakes.

It was all melted by afternoon so we went out for a short walk--we try to avoid dealing with ice. Last night after Bill had gone to bed I was sitting here reading when I heard some spattering sounds. I looked up to see the big fat flakes were back and they kept on falling. By the time I headed for bed at about 1:30, the snow was swirling and when I looked out a bedroom window, I saw that the road and sidewalk were completely white. It is the first time I have seen that here. Even when snow falls, it usually doesn't stick (I think they say "lie" here--at least in some parts of the country).

When I woke up, I peeked out again and saw that it was still there! I was kind of surprised! I was planning to go out and get some groceries this morning, but I decided to wait until this afternoon, figuring everything would be melted by then.

Indeed it was, so I finished the book I was reading (Wednesday's Child by Shane Dunphy--a harrowing, sad, and somewhat hopeful book about his time working in the Irish social care system--for US readers, this would be like Family Services or Child Protective Services) and then I got my backpack and headed for SuperValu.

We'd planned to do our big shop for the month, which includes our stop at Tesco for the few things that we can't get elsewhere, but Bill is having back spasms (a problem that first appeared in 1998 and occasionally rears its ugly head), so he stayed home. I was pleased to go outside into the chilly air, wind, and light rain.

SuperValu is only about a 3-minute walk, so I was there, in, out with my stuff, and home again in a very short time. I decided that since it was a perfect day for a walk I would go to Tesco after all, so after emptying my backpack, I set out again. By the time I was on my way home, I was roasting and was very glad when the wind kicked up again. A bit more rain would have been nice, too, but that started after I got home.

The few centimeters of snow that fell caused a lot of problems--accidents, a jack-knifed truck blocking a main road, problems getting deliveries through, and very treacherous driving conditions in various parts of the country. The library book club discussion scheduled for tonight was even cancelled!

It was a lovely day for a walk here though, and now we are well stocked with important things like coffee, tea, olive oil, pasta, biscuits, extra mature cheddar, and some other stuff we needed. Tomorrow I will probably run over to Country Market for some fruit, veggies, and eggs and stop in at the library where we have a couple of books in. It's supposed to start warming up again and it will be in the mid 50s by the end of the week, they say. Winter did not last long, but it was really nice while it lasted!
Share
Posted by Shari Burke at 3.3.15