Hole in the Wall

We went to Letterkenny yesterday and while there, stopped for lunch at this little hole-in-the-wall Mexican grill. It's been there for a while and even won an award for being the best takeaway in Ireland a couple of years ago, I think. Mexican food isn't much of a thing here, so I've wanted to try it for a while, but the timing was never right--either we were just in Letterkenny for a little while to get a bus to somewhere else, or we weren't there at a mealtime. Neither was the case yesterday, so we ate lunch there and it was sooo good! 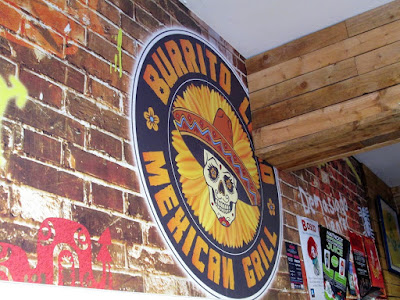 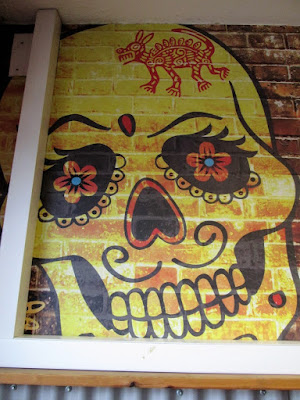 There are three tables inside and we got there just before the lunch rush began, so they were all empty and we sat inside. There's a counter with a few people behind it. You start off at one end and say what you want--burritos, tacos, or whatever. There is also a 'naked burrito' option, which comes without the wrap. You can choose meat, chicken, or veggies. We opted for veggie burritos, which got built from there. We had a choice of white or brown wraps, Mexican or brown rice (we went with brown for both). You get to choose what you want, so at the first station, on top of the brown wrap and brown rice, we had pinto beans, black beans, refried beans, and grilled bell pepper and onion. Then we moved to station two, which had an array of sauces, salads, and other things. We both had medium salsa, corn salad, cheese, guacamole, and I had 'leaves' as they call them here. 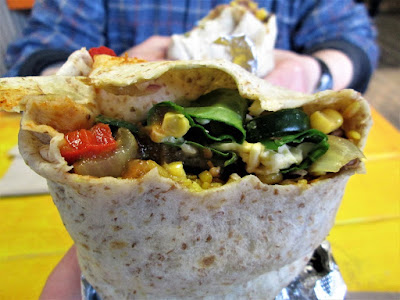 There was a lunchtime special, so the two burritos and two drinks was only €11. The menu board said the burrito was €6, so even if one was not there at lunchtime, the prices are quite good. It was a lot of good, healthy, extremely yummy food. This is a really good little place and I'd go there again if I was in Letterkenny and had the time. I wasn't even sure it was still there before we went, but as were were in the roundabout heading for the bus station, I looked down the main road and saw that it was. Judging from the lunch rush we saw after we'd sat down with our food, it looks like business is booming. 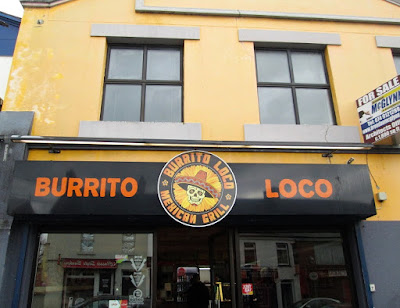 In our wanderings yesterday, we passed this sign, but were not tempted to go into the coffee shop to try it. 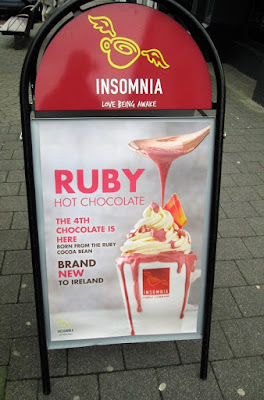 Regular old hot chocolate is fine with me. I don't need it to be pink. I wonder how popular this is. The other side had a picture of some banoffee brownies. Those seemed much more appealing.

And now, I am off to have some lunch.

I'm with you; banoffee brownies sound much more appealing. Though I've a feeling a recipe of my own would be better. Coffee shop goodies tend to be too sweet.

Oh- That sounds like a grand place to eat, Shari! I like those 'build your own' places where you can get what you want and leave off what you don't like.

I would pass on the pink chocolate,too. Do you remember when you were stateside that Nestles made a pink (strawberry) chocolate? Even as a kid I never liked it.

Have a wonderful day- xo Diana