We went out for our walk this morning, staying well within the 2 kilometre limit. There have been more problems over the weekend, particularly in one of the towns where we used to live, because it's right near the border with Northern Ireland and day-trippers from there will not abide by the regulations here. They're not supposed to be here at all. There is apparently a loophole in the legislation which allows the gardaí to enforce the 2 kilometre rules (as they do when it is someone from elsewhere in the republic trying to have a day in the country) that prevents them from enforcing the rules if the people are from Northern Ireland. I suspect this loophole will be closed relatively soon, because there is genuine and understandable anger, as well as concern regarding the upcoming bank holiday weekend. These are small communities and people are sacrificing a lot in order to protect themselves and one another. As just one example, today  when we went out, we wondered why there were so many people lined up along Main Street while keeping their distance from one another. Then we realised that someone had probably died. Because only a few close family are now able to attend funerals, which goes against the usual way of doing things, Irish people have adapted. In the past, we have seen processions moving through the town, consisting of people on foot, some of them carrying the coffin, bringing the deceased through town from the wake location to the church or graveyard. The hearse would drive along, but it was empty. Now that this is no longer possible, people come out to line the sidewalks to pay their respects, because they can do this is a safe way and it must still bring comfort to those who are grieving. This is just one way in which people are making sacrifices in service to the public good. So when people decide they are going to flaunt these rules so they can have a day of fun away from their homes, possibly endangering local residents, it's easy to see why the locals would be upset. The situation is made worse because the UK (of which Northern Ireland is a part) was very slow to act and they are still more lax than we are in the republic.

In any case, we decided to walk the river trail, including a loop which we had not previously explored. When we've been on the trail in the past, we were on our way somewhere, so just stayed on the main trail, which made a nice change from walking on the footpath (sidewalk) along the road. This time, we were just out for a walk, so when we got to a fork in the trail, we took a left and discovered what is my favourite walking route here so far.

Before our walk and even before breakfast, I  had a surprise, though. We heard a knock on the door downstairs, so Bill went down and found the postman, who delivered a parcel. He was not expecting it to arrive so soon. Unbeknownst to me, when my camera conked out last week, Bill went clicking around and found one to buy. Knowing that I prefer not to buy new, he found a refurbished one and bought that. Yay! I'm thrilled to be able to snap pics again and to know that this gadget was fixed up and stayed out of a landfill. He plugged it in so it would be ready for me to test out on our walk. Here are the results.


When we went left at the fork, we discovered a whole new loop that brought us to the lake. We'd walked to the lake just before the lockdown started, but we went a different way and were on the other side. 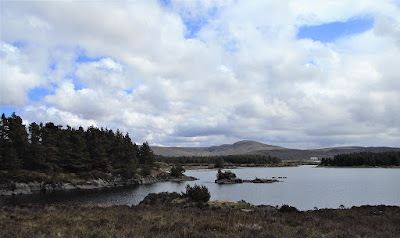 I'm happy that I can snap my pics again. Bill, who is the real photographer in this family, will sometimes ask me what I have something set at. I always say, 'I don't know--whatever it was when it came out of the box or, if you played with it, whatever you left it set at.' I don't want to mess around with the gadget, I just want to, well, point and shoot. 😄

I'm also happy that we walked the new-to-us loop. It's a beautiful walk, and just one of our options for taking exercise, being outside, enjoying our lovely surroundings, and still abiding by the 2 kilometre rule. As I was walking with my favourite person, soaking in the scenery and feeling joy, I was reminded of how much I have to be grateful for.

That was so nice of Bill! I think you found yourself a keeper :)

The camera takes some beautiful photos, with your help of course!

I love that you said you were walking with your favourite person! That's how all married people should think!

Yup, he's definitely a keeper! I've kept right on hanging out with him for 40 years and he's still my favourite person. :-)

What a lovely and loving couple you and Bill are.
Forty years and still he surprises you with a "new"old camera. I love it.
You took some beautiful photos Shari.
I also love that you both do your part to Stay Safe.
Jerry and I do, too!

Please keep taking and sharing photos with us.
I also enjoy Bill's photos on his blogs 🌷

That was so nice of Bill to get another camera.
A lovely post and gorgeous photographs, the gorse is such a wonderful colour isn't it.

Stay safe and well, my good wishes to you both.

Thanks, Jan and Brenda! Yes, that gorse is pretty amazing, especially when the sun shines on it. We haven't had much rain lately, though, I guess there's a risk of gorse fires.