A few weeks ago, I finished knitting a pair of socks for Bill out of some self-patterning sock yarn. I had leftovers. There wasn't enough left for an entire pair of socks, but I was pretty sure I had enough for two feet. I rummaged around among my scrap yarn ball collection and came up with some rust-coloured lace weight boucle-ish yarn with bits of light brown. This was part of what remains from a giant cone of yarn brought back for me by a friend from a thrift shop in Boston. I made a sweater and a pair of fingerless gloves and still have more. The sock yarn had a rusty brown stripe, so that would work well. I decided to use crocheted ribbing for the cuffs, so I chained the number of stitches I wanted and then worked 3rd loop half double crochets back and forth in rows. When this was long enough to reach around my ankle comfortably when slightly stretched, I slip stitched the last row to the beginning chain to form a tube. Then I got out my (US) size 0 double points, picked up 68 stitched around one end of the tube, knit a couple of rounds, and proceeded with the heel flap, making the foot as usual. Then I repeated for sock 2, which I finished Tuesday, with less than a foot of yarn to spare. I've been wearing them for the past couple of days and love them! 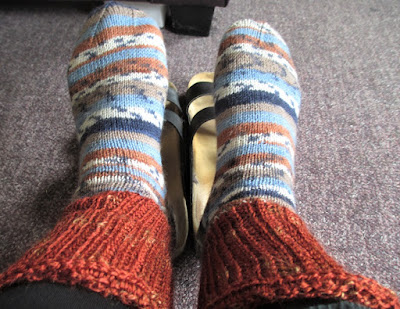 The ribbing curled on the edges (which became the top and bottom of the cuff when joined into a tube), but the rest of the sock eliminated that on the foot side. I had planned to do some rounds of crochet on the top to tame the curl there, but I found I quite liked it, so I left it alone.

I also have a large thread crochet project that I work on at night when listening to podcasts and audiobooks. I like to have projects using different techniques on the go at the same time so I can avoid making the same hand/arm movements all the time.

I'm on something of a sock kick at the moment, though, so this afternoon, I listened to a couple more chapters in an audiobook and cast on for another pair of socks. I always make them cuff-down and here's the start of the first sock, knit in a cable rib. 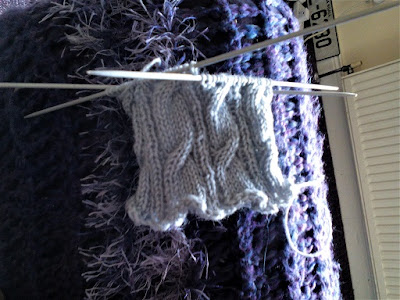 This is fingering weight superwash wool leftover from previous projects. It turns out that I added this cone of yarn to my collection 5 years ago today. I remember because I found it at a charity shop when we were in a town waiting to hear from a letting agent about whether we'd be able to rent the place we'd looked at the day before. It seemed like a really good sign when we walked into the charity shop and I spotted three big cones of yarn for a few euro. Two cones were wool and one was mohair. As I was paying for them, Bill asked how I was going to carry them home, since the backpacks we'd brought with us were full. I said I didn't know, but one way or another, they were coming to live with me! It was meant to be, because there was no issue. We got the call that we could rent the place and I asked the lovely woman at the B&B if I could leave the yarn there and pick it up when we came back. 'Of course you can!' she said. So I did.

When we went to pick it up a few weeks later, there was a German woman in the lounge. She was staying at the B&B. She knew about the yarn and, being a knitter herself, was pretty pleased to know where I got it. She made plans to go down to the charity shop to see what she could find. I don't know whether she got lucky that day or not, but in the time that we lived there, I found lots of great yarn at that shop, some of which I still have.

I've never found any sock yarn at a charity shop, but I can make the sock yarn I get elsewhere go farther by using different yarn for the cuffs, as long as it won't shrink in the wash. The nylon in sock yarn adds strength and helps the socks to not wear out quickly, so using that for the feet is important, but not so much for the cuffs. For the new socks on my needles, the cuffs will be in this light grey and the feet will be in sock yarn that knits up into forest green and grey stripes.

I hope the day brings you some moments of peace and contentment even in the midst of the crisis that is unfolding around us.
Share
Posted by Shari Burke at 9.4.20

You are so talented Shari!
These socks are wonderful...I love the colors!
My daughter taught herself to knit but I never got into it.
I embroider and cross-stitch.
Have a lovely evening 🌷

They look like they'll have no problem keeping your feet warm!

Shari, the socks look great and I do like the colours :)