The Middle of the End

Happy 2020! I started off the new year by starting a new book--one that I know I am not going to keep. Looks like I will enjoy it enough to read it before I donate it, instead of deciding I don't like it and setting it aside. Here is the middle part of last month's list of books that I liked well enough to continue reading to the end.


Agatha Christie’s Secret Notebooks: Fifty Years of Mystery in the Making by John Curran
We happened to be in the book room of the local charity shop when the volunteer placed this book on the shelf, right next to where Bill was standing. He immediately called my attention to it and I snapped it up—it probably spent about 30 seconds on the shelf. The author was at a conference and met Christie’s grandson, Mathew Pritchard. They became friends and Curran spent time at the family home. During one visit, he discovered Agatha Christie’s notebooks and became a bit obsessed with them. This book is the result. In it, he talks about her process, her work, and includes two short stories—one is a different version of a previously published story and one is a new Poirot. I was thrilled to be in the right place at the right time so I could bring this book home with me. It’s a keeper.

This is exactly what the subtitle says it is. It was an interesting read for people who are interested in poetry, feminism, activism, and civil rights.

The Janus Stone by Elly Griffiths

This is the second book in the author’s Dr Ruth Galloway series. The main character is an archaeologist who gets drawn into investigations when bones are found. The e-audiobook section of
the library website has the first four in the series. I’d listened to the first one a few months ago and I liked it well enough to reserve the second one. The day before it was to be available, I found this book in a charity shop, so bought that and cancelled the reserve. I found book 6 in a different charity shop several weeks ago.

In this book, the bones of a child are found during the construction of what are to be luxury apartments on the site of a former children’s home. Before it was a children’s home, it was the home of a well-off family where some terrible events occurred. Dr Galloway and the police are called in and find themselves in some difficulty trying to figure out what the bones mean and who they used to be. At the same time, there is an archaeological dig going on nearby. What is the connection of the lead archaeologist to the family who used to own the property? What does the placement of the child’s bones mean?

The Outcast Dead by Elly Griffiths
This is Book 6 in the Ruth Galloway series. 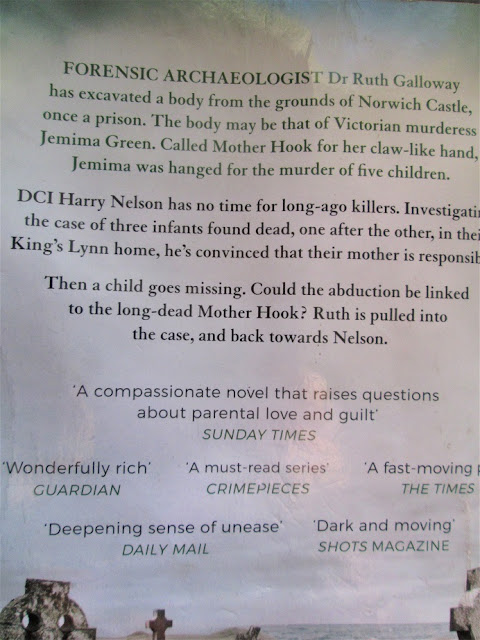 Here's to an excellent reading year!

First time I've heard about Agatha Christie’s Secret Notebooks but now I HAVE to get a copy! Thanks for posting about it!

Whatever your reading taste, books in all their variety fill the year with comfort, excitement, enlightenment, entertainment, information, and inspiration. So much between two covers. Happy, happy reading!

I was thrilled to have been in the right place at the right time, Vicki! When you get your copy, enjoy!

Yes, Laurie--happy reading! And in this new year you'll have the thrill of releasing your new book. Yay!