We don't really exchange Christmas gifts anymore. We send a few cards and make a donation to Animals in Need, but other than that, the only gifts we give are a few things we send to our daughter. There are new customs regulations for things going to the US, so when I sent her a parcel a couple of months ago, it took 5 weeks to arrive. I sent the Christmas parcel a couple of weeks ago and hoped it would get there in time. This time it only took a week.

Here are  few of the festive things I made for her: 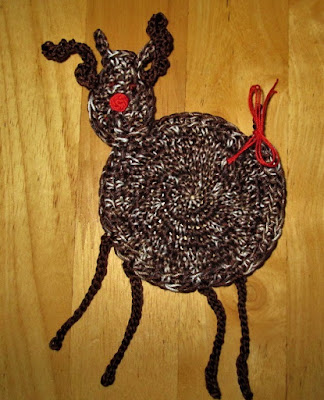 The pattern for this coaster was in a magazine she'd sent me last year. I planned to make it for her this year and when she sent me a Rudolph ornament that says, 'Mom' a couple of months ago, it seemed particularly appropriate. We have a thing about Rudolph in our family.

I always make her some kind of blue Christmas tree. When she was small, we lived in an apartment that was at the end of a cul-de-sac. There was a sort of platform on each building above the door and at Christmastime they'd place trees strung with blue lights on these. Every evening as it would start to get dark, she'd look out of her bedroom window, which gave her a view of the whole street, and would call out, 'The blue trees are on, Mom!' when the lights would be turned on.

This year, I had a metal piece from a deconstructed bracelet I picked up at a charity shop in Ballina when we were there a couple of months ago and I wanted to use that. I went back and forth about how to make the tree, but when I found a 'posh scrap' of roving, I opted to needle felt it. I'd used some of the same roving a couple of years ago to make her an ornament, so the tree will match. 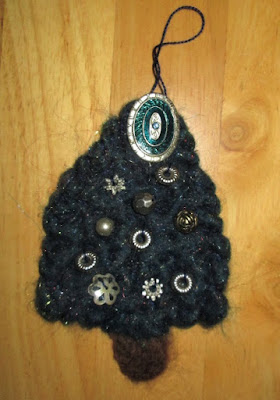 I used other beads and bits from deconstructed necklaces found in charity shops to embellish. The roving has some sparkly strands in it that catch the light. I like the wonky shape that resulted when I did the embroidery.

This is the the other ornament I made for her with the same roving, which you can see a little better: 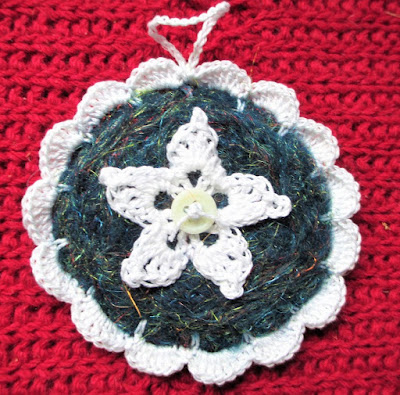 I also made her a hat, using a pattern a friend had sent me a few years ago for what she calls a pocket hat. It's made in ribbing, so is very stretchy, but when not on a head, is very compact, so it scrunches up to fit in a pocket. During the summer, I found a single skein of a very soft and fluffy bright blue yarn with a metallic thread wrap in a charity shop. I bought it knowing I'd make something for her with it and eventually I decided on the hat. I have just a small scrap ball left from the skein, so it was the perfect project for the yarn. 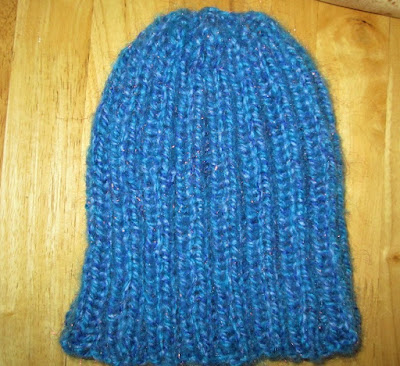 So I'm all done with the Christmas stitching. It's a very quiet and simple time of year, so I am very much enjoying listening to music, A Christmas Carol in various permutations, and just being during my best time of the year.

We used to buy everyone a present for Christmas, but then we started just buying for the kids and the adults would have a White Elephant gift exchange where you can swap the present you pick for something someone else has picked.

Thanks, Vicki! Rudolph was a little bit fiddly, and there were lots of ends to weave in, but he is cute, so it was worth it.

The white elephant thing sounds fun and a good idea!

What a great idea for a hat! Lovely color and how wonderful that it scrunches small. Love the history of the ornaments you make. For us, with everyone coming home, Christmas is a busy but fun time. Lots to do, but as one of my blogging friends noted, as long as the cooking is done and the presents are wrapped, nobody will much care how clean the house is. So true!

Also, now that I am following you this way, it is not as easy to respond to any comments you might make. I could sign up for follow-up comments, but I did that once with another blog and boy oh boy did I regret it as the comments came flooding in. Anyway, just wanted you to know.

In case you see this Laurie, just wanted to say no bother at all about not responding to follow up comments (like this one--LOL). I respond to comments because I feel it is a polite and respectful thing to do, but I do not expect that there will then be a 'comment conversation.' That would be cumbersome for everyone. I hope you have a wonderful festive season.

Scrolled back to read this comment. I still remember the flurry of comments---from other readers---that poured in when I once signed up for follow-up comments on a blog. Hoo-boy!