When we got back from Dungloe the other day, we discovered that the first bloom on our Christmas cactus was starting to open. 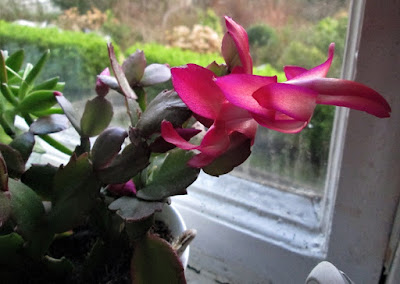 This cactus has come a long way in two years. We grew it from one little segment that had broken off a plant that had been sold by a grocery store. The mother plant had been bought (and I wonder whether it survived because that store always over-watered their plants and they had a tendency to rot). There were a couple of pieces on the shelf, so Bill brought them home. First we stuck them in water, but that didn't work too well, so he put one in dirt and we waited. Nothing much happened for a while one way or the other. It didn't grow, but it didn't shrivel up, either, so we figured that was a good sign. Then one day, we saw signs that new segments were going to grow. After that, new growth was busting out ll over the place. Last month, for the first time, we saw buds appearing and we realised it was going to bloom this year. Yay!

We have another cactus growing from a segment that fell off of this plant when we moved. Maybe one Christmas, they can bloom together.
Share
Posted by Shari Burke at 24.12.19

It's very beautiful, glad you didn't give up on it and gave it the time it needed to bloom!