A Bit of Mystery

Yesterday I posted the first of the books I read in November. I'm continuing that today with the mysteries I read last month.
Three Bags Full by Leonie Swan translated from German by Anthea Bell

I found this book on a cart of books for sale at the Central Branch of the Donegal Library when we went to Letterkenny one dy. Actually, Bill found it and pointed it out to me. 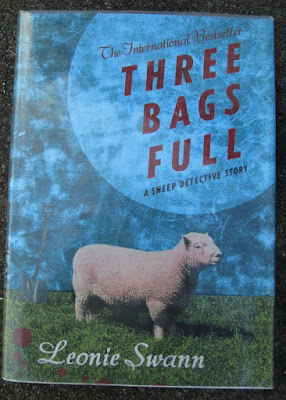 I loved the cover and when I read what it was about, I knew it was coming home with me, even though I wasn't totally sure I would like it. It was a good decision, because I loved it. It was funny and actually quite a bit more substantive than I would have thought from reading the dust jacket. It's very philosophical and even a bit ethnographic.
One day, a flock of sheep in the fictional Irish town of Glennkill discover their shepherd dead--and foul play appears to be involved. The sheep, lead by the smartest sheep, Miss Maple, are used to books that their shepherd would read to them. They decide that they are going to find out what happened, so they begin to try to figure out the story and solve the mystery, using what they know of how stories work to assist their thinking. Along the way, they have to figure out human behaviour (and notice how often it is like that of sheep) and determine what is the nature of human reality.

Bodies in the Library by Marty Wingate

This is the first book in a new cosy mystery series featuring Hayley Burke. I found it in the e-book section of the library website and I’m hoping they will have subsequent books as they come out. This one was published in 2019, but I’m not sure if that’s the regular book, the e-book, or both.

Hayley Burke has a new job as curator of the First Edition Society, located in Bath, where Jane Austen gets most of the literary attention. This is a library/society dedicated to first editions of Golden Age mystery books written by women, with Daphne du Maurier included, because the woman who founded the society (Lady Georgiana Fowling) liked her work, too. Lady Fowling also wrote a kind of fan fiction of her own, so those books are also included. Lady Georgiana has died and created her will so as to support the society, which doesn’t sit well with her greedy nephew, who has engaged in shady tricks to try to get the will overturned, driving off the first curator in the process. Ms Burke, already working at the Jane Austen Centre as a sort of PA gets the job with the help of a friend who is on the board. One problem for her is that she’s not familiar with Golden Age detective fiction. As she tells one of the other characters, her degree is in 19th century English literature—she read Trollope, not Tey. She does have some ideas for the society, though, most of which don’t sit well with the elderly secretary, Mrs Woolgar, who isn’t fond of new ideas. The resident cat, Bunter, is happy as long as his food is presented on time and the catnip mice keep coming. When Hayley discovers that a fan fiction writing group is in search of a meeting place, she offers them the use of the library. Mrs Woolgar is not pleased, especially when the leader of the group is found dead in the library one morning. What are the similarities between this body in the library and Christie’s? What would Miss Marple do?
This was a really fun read and I’ll be reading more as the books come out, if I have access to them. The author’s website says she also writes a cosy mystery series with a gardening theme, called The Potting Shed mysteries and a series called the Birds of a Feather mysteries.

The Lighthouse by P.D. James 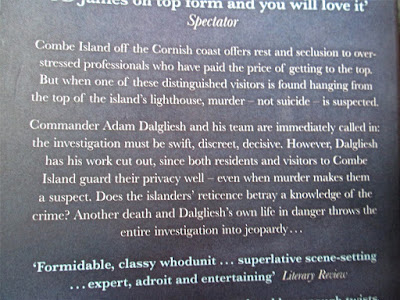 Colour Scheme by Ngaio Marsh
After reading the PD James book, I felt like more detective fiction, so I turned to my e-reader and picked up where I left off In Ngaio Marsh’s Roderick Alleyn series. This one was published in 1943, so it’s unsurprising that WWII features in the story. This one takes place in New Zealand at a resort spa, where the mud baths are thought to have healing properties. It is quite the opposite for one of the characters in the book as he meets his end in one of the boiling mud pits. The red flag marking the danger spot has been removed from its usual spot, so perhaps it was not a tragic accident. And who is the spy signalling from the hills?

Hope this first week of December has started off well!

All of these books sound good, especially Three Bags Full.