Wow, September flew by in a blur! It's always the way. I plod through May, June, July thinking they will just go on forever. Then, whoosh! Here we are in October waiting to see whether whatever is left of Hurricane Lorenzo decide to call on us later in the week.

My September reading was a mixed bag. I enjoyed some of the books a lot, some were OK, and one was quite bad. Here are the first few:


The Last Man by Mary Wollstonecraft Shelley
I picked this book up at a charity shop a couple of years ago. It sounded intriguing and I liked the artwork on the cover. 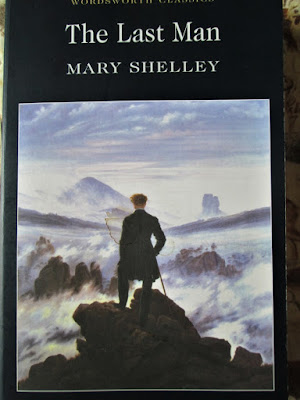 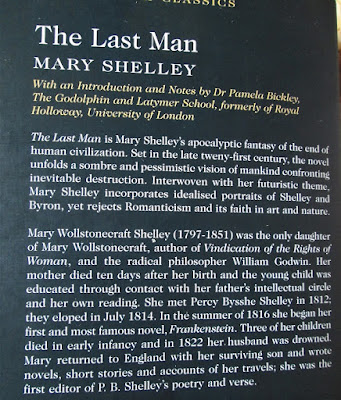 I started the introduction about a year ago and then other books took priority and eventually this one ended up on the bottom of the pile on the table by my chair, which seems to grow when I am not looking. I decided to read it and decide whether I wanted to keep it or pass it on. Then it dawned on me that I could do both, since it was probably available for download on Project Gutenberg. I checked and it was, so I started reading knowing that I'd donate the book when I was done with it. Turns out I would have done that anyway, even if I'd not downloaded it. The book takes place from 2073 to 2100, but I had to keep reminding myself of this, because the descriptions of warfare and transport and all the rest of it sounded very much like everything was happening a couple of centuries earlier. The story was pretty good, but the writing was not pleasant to read. After I finished, I looked it up and discovered that I could have saved a lot of time by simply reading the great summary on the Wikipedia page.

Tales from the Dead of Night: Thirteen Classic Ghost Stories selected by Cecily Gaylord
I enjoyed both of these books. The first one is a collection of older stories. The second is a mix of older and more recent. I think many of these used to be told at Christmastime, but fun to read at this time of year.


The Christmas Cake Murder by Joanne Fluke
This is the 23rd book in the Hannah Swenson cosy mystery series and is a prequel. Hannah is an amateur sleuth and baker in a small town in Minnesota. I’ve read a few of these books in the past, if I came across them and was in the mood for a cosy mystery. They were fine, but never something I actively sought out. I liked the few I read enough to pick up another if and when I happened across it, but after this one, that’s over. It is dreadful. I was scrolling through the library catalogue one night, looking at Christmas mystery titles when this one came into view. One of the other books I read from the series was also a Christmas one, and it was forgettable, but not terrible, so I requested this one. The only reason I did not close the book and place it back in the return pile was because I was comfortably in bed in the middle of the night and was too lazy to go downstairs to choose another book. I had my e-reader by the bed, but was not in the mood to read on a screen, so I just went on for the couple hours it took to read this. It’s not much of a story. The dialogue is weird—no one talks like that. A good portion of the book is devoted to recipes. Much of the rest is full of tedious description of basic things—turning on a gas fireplace by flipping a switch took up a good portion of one page. At another point, there was a very long step-by-step description of how to make breakfast burritos, right down to placing paper towels on the plate to drain the sausage and bacon, wrapping the assembled burritos in plastic wrap and refrigerating them (I was thinking the tortillas would be nice and soggy after that). I wondered whether there was some sponsorship agreement the author has, because she was not shy about using brand names, even where these were not necessary. In one scene, after a yet another painfully stilted bit of dialogue, instead of saying that Hannah placed crackers on a plate, there was a list of the brand name of each cracker. I can see why the author needed all of the filler, because, as I mentioned, there is no real story. There is no mystery. I won’t be reading any more of these books.

I'll post a few more tomorrow--the rest will be books I liked. 😀

We went to pick up some groceries this afternoon and I see that the Christmas biscuit display has appeared. the biscuits are always the first things to appear at SuperValu. 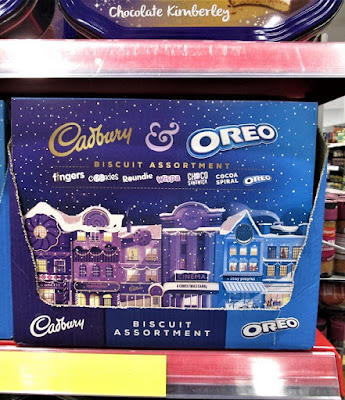 I finally gave away two books that I attempted to read two or three times and decided--I am NOT going to force myself to read something! lol
Great picture of you- Nice to put a face with the name.
Ah...Christmas biscuits already...and on we go! Hugs- Diana

It's true--sometimes, ya just gotta give up because there are too many books and too little time! :-)

I see some good sounding books.I like Fluke a lot. I have so many books that have ended up on the bottom of the pile.

The pile just grows so quickly and something has to be on the bottom--LOL--I need to stop going into charity shops and heading straight for the bookshelves/book rooms! I've enjoyed Fluke in the past, but this one was really bad. I googled the book at one point and apparently it was a disappointment to a lot of fans, who also had a low opinion of the few before that. For the sake of her fans, I hope the series can get back om track!

I haven;t tried the biscuits. Barm brack (a yeasted raisin bread) should be available soon--I always look forward to that. Then I eat some every day until I am tired of it. Then the following year, I look forward to it again :-)