Budget on the Bus

Yesterday afternoon, when we got on the bus to come home from Donegal Town, the radio was on, as the Minister for Finance was presenting the 2020 budget. This happens every October. The past few years have been slightly different, because the current government had to enter into a confidence and supply agreement with one of the other major parties after the last general election. This agreement was to last for three budgets, but this is the fourth. No one wanted to bring down the government while there is Brexit turmoil, so the parties worked together to get the budget done, even though there has been the usual grumbling.

This is the first time Bill and I had actually listened to the budget presentation--or part of it at least. He was already talking when we got on the bus. We've read about the annual budgets in the past, but it was different to hear it presented in this way. I was struck by the many ways in which people are helped here. I know that people don't think there is enough help and I have no way to evaluate that. I also have no idea how it compares to other countries, except the one I was born in. I'm sure there are more robust governmental support  systems in place in some other countries, but as I was listening to the announcements about increases in the living alone allowance, the carer allowance, the lone parent allowance, the fuel allowance, and more, I was thinking about what a contrast it is from where I came from.

One of the things that has surprised both Bill and me over the years we've been here is how there will be the budget presentation and then things will take effect within hours. Yesterday, an increase in the carbon tax was announced. At the same time, it was announced that the price of petrol would be rising at midnight. Sure enough, when we went to pick up a few groceries, it had gone up by 2 cents since yesterday. 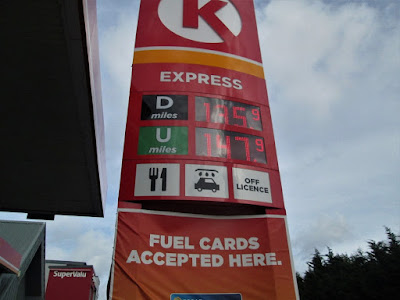 The top is diesel, the bottom is petrol, and that is the price per litre.

Anyway, it was an interesting ride home.

To follow up on my post yesterday, I mentioned barm brack and a couple of people said they didn't know what that was. I should have said! It's a round yeast raisin bread that is a Halloween thing. It is sometimes called Halloween brack.

I'm off to make a cuppa and work on a sock. Happy Wednesday!

People have very strong opinions about politics and I try not to listen or read anything to do with the subject very often. I googled barm brack yesterday and may search for a recipe.

I've a recipe I call Breakfast Bread that reads very much like Barm Brack. I don't make it often because of tracking down all the dried fruit, but it's not that hard and very good. The big trick with it is to make the tea very strong and give the fruit time to soak.

Tea brack and the Halloween barm brack are different things. Tea brack is available all the time and can be OK or not, depending on the spices people use and the amounts. I'm not in love with that, but sometimes it can be OK. I never buy it, but have had it when others have given it to me. Halloween barm brack is similar to raisin bread (made with yeast) that's sold in the US. It's not a quick bread, and it's lighter--they bake a ring inside. I do make my own raisin bread that's similar, but not quite the same :-) Anyway, I should have been more precise in my language, because I googled and I see that it is important to use the term Halloween brack!