We were in Aldi today and this was at the end of a centre aisle: 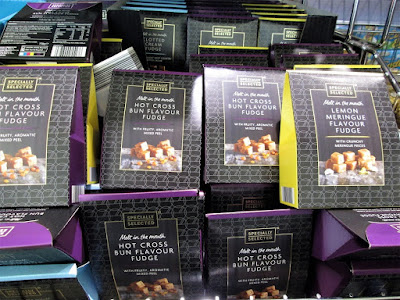 Neither hot cross bun nor lemon meringue seem like appealing fudge flavours to me, so I snapped a pick and moved on without putting any in my trolley. I didn't notice until I looked at the picture, that there is a box of clotted cream flavour in the back. From the amounts in the display, it looks like more people are choosing lemon and clotted cream than hot cross bun.

And for those of you who might want a pop of colour in your day, here are a few flowers that are mixed in among the daffodils and tulips in some planters. 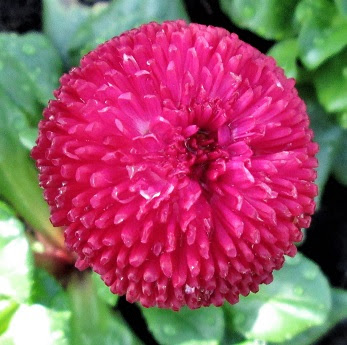 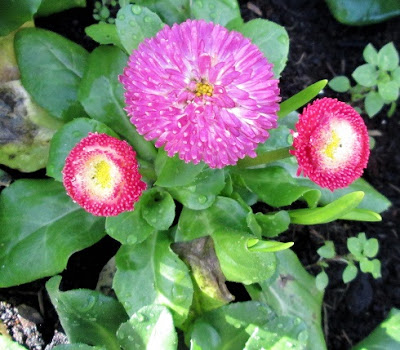 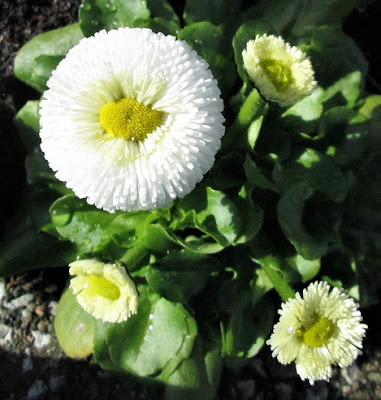 Although it rained off and on today, when I stopped to look at the flowers, the sun was shining and the colours were quite striking!

Had some books come in at the library that I'm looking forward to--one is Irish Gothic Fairy Stories from the 32 Counties and the other is Threads of Life: A History of the World Through the Eye of a Needle. I had another book come in after we'd been and gone, so I'll pick that up next week.

On the way home, the bus driver took a detour to up a hilly road to let a woman off right by her house. He thought he'd be able to connect with another road, but they'd dug it up, so he turned around after she got off and we backtracked. I think it's so great that he went out of his way to let her off at her house at the top of the hill, so she didn't have to climb with her bag of groceries. It's been a bit of a surprise to me how riding the bus regularly these past few years almost always provides me with a reason to smile, because I am witnessing people being so kind to one another in one way or another.

Here's hoping there are many reasons to smile throughout your day, too.
Share
Posted by Shari Burke at 7.3.19

How nice of that bus driver and how great that passengers didn't seem inclined to complain that he went off the regular route.
NONE of those fudge flavors sound good to me---fudge should taste like----wellllll---fudge! lol
I hope you have a great night, Shari. xo Diana