Here you see the usual school pick-up nonsense. Most days, I just marvel at the insanity from up the hill, but sometimes, I get annoyed. 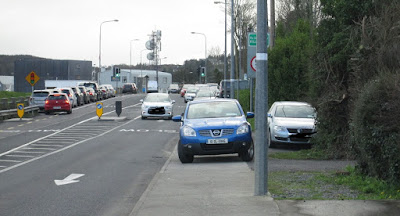 The car on the right is parked in their own private parking spot in front of their home. No problem there. The driver of the blue car that is parked on the footpath was first in line--there were others behind her. You might be able to see the brand new traffic lights at the newly built crosswalk and the freshly painted road markings. All of this was recently done in order to make things a bit more orderly, I guess. Fail. As they were doing all this work, Bill and I would have conversations about how this was not going to help and would, in some ways, be problematic. They narrowed the road beyond the school by placing an island in the centre. This prevented people from parking (sometimes double parking) on both sides of the road and blocking traffic. But, as I told Bill at the time, they'll just park on the footpath. They used to also pull into the lane that leads up to where we live and sit there, or park in front of it, blocking the way. That seems to have stopped after some of the people who live here and drive had to have a word or two. People apparently needed a reminder not to block the entrance to the local hospital, as well--there are bright yellow lines and an X in front of that now.

Our kitchen window here provides us with a view of the daily chaos, as did the one in the apartment we lived in in Moville. Here it's at the bottom of the hill--it was right below us in Moville, where we frequently watched people double park and then fling open their door, causing other cars to slam on brakes. We watched people leaning into car windows to have a chat, while nonchalantly standing in the middle of the road. We watched people trying to get out through the way in, thus causing traffic mayhem. And here today, not for the first time, as I was trying to make my way home from the grocery store, I had to drag my heavy rolling backpack off the footpath and bump it over grass before heading off  into the road and back onto the footpath after I'd gotten past these unfortunate people. What about older, possibly infirm, people? Or people who are recovering from an injury or in a motorized wheelchair?  They would not have been able to get past these inconsiderate drivers. These people try to jockey for position and be as close to the school as possible to pick up children who, for the most part, could easily manage to walk a few extra steps. These are the same hordes of children we sometimes encounter when we get off the bus, as they run (literally) down to the shop to buy junk food on their lunch break, at times almost running directly into us. If mummy, daddy or grandma is a few extra yards away from the school, I think they'll manage to get to the vehicle anyway.
Share
Posted by Shari Burke at 5.3.19