We went to watch the parade today--our fifth! The weather conditions have been different for each one. The first two took place on sunny warm days. I felt kind of bad for the vendors at the one in 2017, because it was bucketing down steadily and it didn't seem like too many people were keen on buying burgers, chips, ice cream, or candy floss from the food trucks. Last year, it was cold and there were a few snow flurries. This year was sort of a combination of all three. We've had sun, rain, sleet, hail, a bit of wind, and a little chill. The light was such that I could not see what I was taking pictures of, so some of the pics didn't come out, but a few did, and they provide a flavour of the event.

Patrick's first task today was to try to clear the road of vehicular obstacles. I was unable to discern whether he was using the same method he used centuries ago to drive out the snakes, but in both cases, he was successful. You can just see him there on the right lane in front of the fire truck. 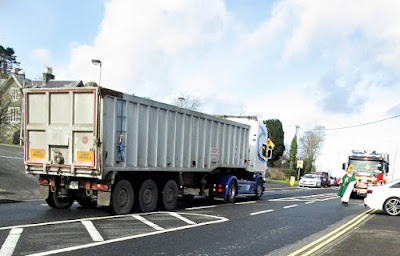 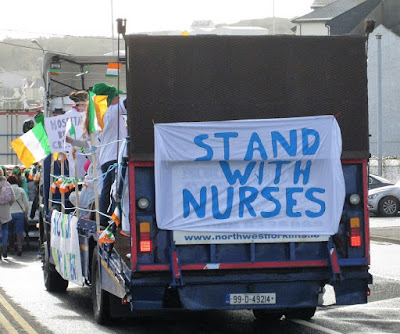 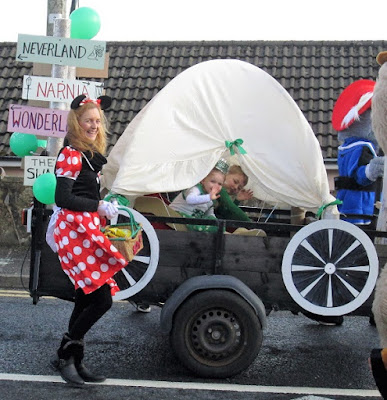 Since this national holiday falls on Sunday this year, people will have tomorrow off. That means an extra party night for some, but for today, there were families out and about, enjoying the parade and celebrating Ireland, from elders to babies and all ages in between. 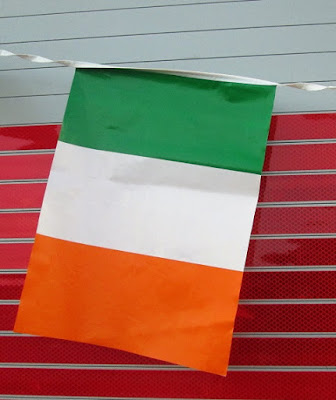 I wish you a happy St Patrick's Day from County Donegal!
Share
Posted by Shari Burke at 17.3.19

Happy St. Pat's Day, Shari. I love the pictures of the parade. The only thing missing is the sounds and scents. Have a lovely night- Hugs- Diana