As the UK government stumbles around in search of reality regarding Brexit, the likelihood of them crashing out of the EU seems to be increasing. There are still people, including leaders of the odious DUP in Northern Ireland, making hypocritical noises about the 'precious union' and claiming that the answer is simple--just renegotiate the agreement it took 2 1/2 years to craft and get it done in a couple of weeks. These people and others seem to think that 'negotiate' mean that they will dictate what they want and the other side will give it to them, completely and quickly. For some MPs, who are trying to find a positive way forward, things have gotten quite serious--one woman was advised by police not to go home this weekend after death threats were made against her. A week or two before the referendum, an MP was actually murdered as she was in her home town speaking to constituents, so these things are taken very seriously. From what I've been reading, the UK as a whole is not at all ready to crash out and Northern Ireland has done nothing to prepare. What could possibly go wrong?

In any case, if the UK crashes out there will be serious repercussions for the Republic of Ireland. To be sure, there will be benefits, too--many UK businesses have made plans to move here or have already done so in order to stay within the EU--but for most people, there will be some negative effects.

There isn't anything I can do about the bigger picture, but in terms of us personally, I suppose I should prepare where I can. This means focusing on food for the most part. Ingredients for manufactured food products, basic food items, and much fresh fruit and veg usually enter Ireland through the UK. That means that in the event of a no-deal exit, there could be disruptions to the supplies until alternate routes are found or they streamline the new system of checks that will be required. It's quite possible that eventually, such disruptions could lead to more things being grown and produced here, but that would take some time. I'm also told that, since we live in a border county, we could expect to see people from Northern Ireland coming here to buy things, as food shortages would be expected throughout the UK.

We don't use much manufactured food, so I don't need to consider that. I sometimes buy rolls or bread, but usually I make bread and muffins, so as long as I have enough flour, I'll be good there. I'll buy an extra couple of bags of strong wholemeal flour and that should be good. We no longer eat meat, and the mackerel that we do sometimes eat is the most local food we can get here. I have local fish in the freezer. Dairy is another food that is not quite as local as mackerel, but still comes from the same county, so that should be fine, too. The same is true for eggs. We have a good supply of canned and dried pulses, but since we eat them regularly, it wouldn't hurt to get another bag or two of red lentils and a few more cans of chick peas. I've got brown rice and wholemeal pasta, but might get an extra bag of each. Porridge oats are the grain we use most, so I'd better pick up some more of those. The biggest issue, should these food issues come to pass, would be the fruit and veg, which are the foundations of most of our meals. I buy fresh and frozen veggies, and fresh, frozen, and canned fruit. For some fruits, like pineapple and peaches, canned is best. For some, like raspberries, frozen is the way to go. I prefer to use frozen peas, corn, and cauliflower, rather than buying fresh, even when available. Most agriculture in Ireland is meat and dairy, and the kinds of crops that will grow here without a polytunnel seems to be limited, so while I can sometimes buy Irish-grown fresh produce, often I cannot. We have an added wrinkle in that many of the things that do grow here are also Vitamin K rich foods and we have to be careful how much of that Bill consumes. We have plans to try to grow some leafy veggies, cucumbers, herbs, and maybe green beans, but who knows what kind of growing season it will be, whether we can protect the crops from the hares, and whether or not things will grow. Even if all that works in our favour, it will be a while before we'd be able to eat what we grow.

So after that little inventory it appears that, over the new couple of weeks, I should be sure to buy some canned fruit, frozen fruit and vegetables, a few bags of porridge oats, a bag of strong wholemeal flour and a couple bags of red lentils to add to what I already have. If there is no hard Brexit and no disruption, then there will be no harm done--I would buy this stuff anyway at some point, it will not go off,  and it will all be used. 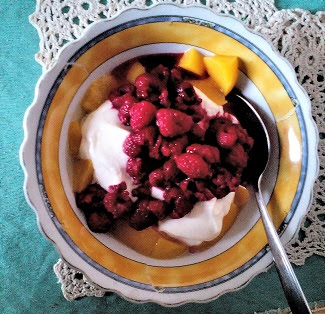 It seems like there is always something going on the political world that can affect us one way or the other. I am sorry you have to even worry about that but know it is a reality. I do hope they settle things quickly (hahaha) and that it works out in the best interest of everyone. At least you can stock non-perishables that will be used long term whether there is a problem or not. xo Diana

Wise you are to think ahead, anticipate.
Stocking up with the nonperishables that you use, seems wise.

I agree with Diana above, it seems we are often thinking of late of the
differing political implications which are having an impact on our life.
At least it has seemed that way to us in the past year or so.

It reminds me of the rationing I remember my parents talking about, many years ago.