Last week, I posted a hat that I made for someone who requested it, along with the basic recipe for making it (like most recipes, adaptable to suit individual tastes). Making that hat put me in a hat-making mood, so I made a couple more.

When I make hats, the focus is sometimes on structure--hats have a general shape, even if it's endlessly variable, so sometimes I am playing with that shape. Other times, it's a particular stitch pattern/combination that I'm interested in experimenting with. Very often, it's yarn and colour that inspires me. Hats are great projects for using scraps, odd balls, textures, and fun colour combinations. For these two recent hats, I wasn't doing anything special as far as structure goes, and the stitch variations in one were simple and designed to just add a bit of textural interest. It was the yarn and colour that I was focusing on here.

For this first hat, made using the same needle size and numbers as the hat in the previous post (US size 6 needles and cast on 80 stitches), I wanted to use the white mohair for the brim. I had a partial skein of this and had thought about using it for another project, but knew there wouldn't be enough. There was plenty for a warm, wind-resistant hat brim, though. I had leftovers from a cone of navy blue laceweight wool that I'd found on a cone in a charity shop, so I made the brim holding that and the mohair together. Then I switched to a DK weight wool in what the label calls 'bright blue,' and a fingering weight navy blue wool held together for the rest of the hat. 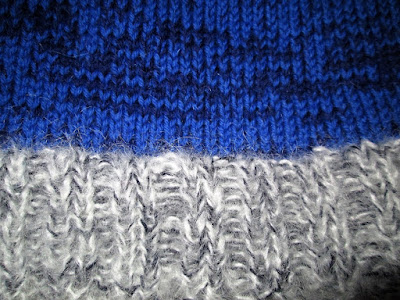 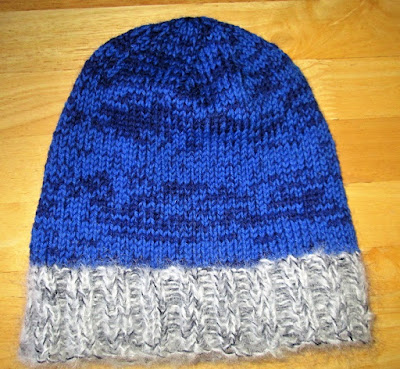 I love the hat, had fun making it, and was thinking about how many different people and places were involved as I was knitting. The needles I used are vintage nylon needles that belonged to a former co-worker's grandmother from Maine. The mohair came from a Facebook friend in the far north of Ireland. The fingering weight was bought in the charity shop here in Killybegs the week we first moved here. The bright blue belonged to a friend's late wife and came from the UK. And the navy blue came from a local friend who got it at a charity shop in Donegal Town.

I finished the second hat last night. A couple of years ago, I crocheted myself a lightweight hat in a lace stitch using red, white, and green yarn with a metallic thread. I wear it during the festive season, but if it's chilly and I'm going out, I switch to another hat for warmth. As I was making some ornaments the other day, I had an idea for a warmer and slightly more subtle festive hat, so I tweaked the basic hat recipe to suit the yarn I wanted to use. 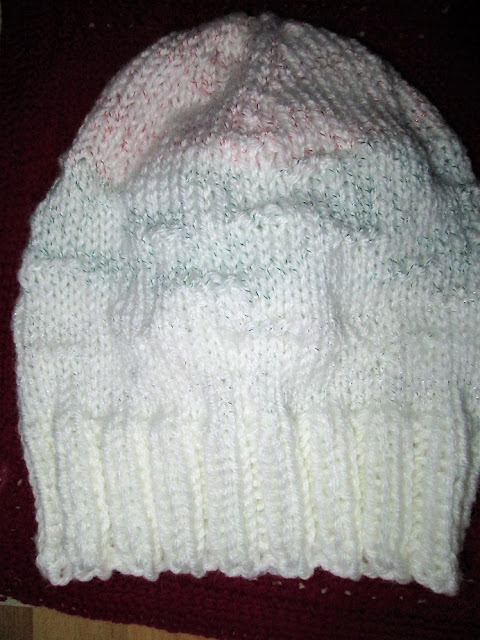 The main yarn is an aran weight white yarn that someone gave me when I was doing the knitting/crocheting group at the library in Moville. It was in a huge skein and I used most of it as part of a blanket, but still had a good-sized ball left, some of which was used here. I doubled that for the brim and when that was done, cut one strand of yarn and added in a fingering weight white with a silver metallic wrap to begin the rest of the hat. I had some mini-skeins in Christmas colours that a friend in Oregon had sent me. I've used most of it, but still had some left, so used a bit of that here. When the silver ran out, I added a strand with green metallic. When that was done, I added the white with red metallic. As I was knitting around and around, I randomly did purl stitches in sets of 1, 3, or 5, just to add a little texture. I did this hat on 72 stitches on 6mm needles.

I am thinking about another hat, constructed in a different way, that would also play with colour. I might be casting on for that soon.

I hope you're enjoying a peaceful day today!
Share
Posted by Shari Burke at 8.12.18