A couple of weeks ago, someone contacted me about buying a hat. I'd made him one earlier in the year and he told me he wears it all the time and was afraid he'd lost it a few weeks ago, so he wanted a spare just in case. He said he'd leave it up to me to decide on colour, so I rummaged around and pulled a bunch of leftovers to consider. In the end, I went with some Noro. I figured he'd like the colours and the gradual transitions between colours. I spent some time happily knitting and was quite pleased with the result. 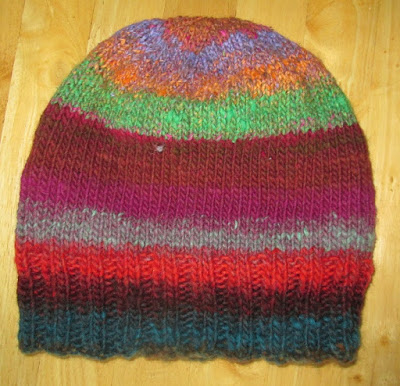 With Noro yarns, it's all about the colour, which was perfect for the kind of hat he wanted. I sent it off and hoped he'd like it. I just spoke to him--he got it today and is thrilled. He loves the colour and it fits perfectly. I'm happy that he's happy!

This is just a really simple knit and looks nice in any yarn. It's great for variegated yarns with short or long colour changes. It can be made in a solid colour for a more understated look. I've held two strands of thin yarn together in different shades of the same colour to make a hat like this and it looks really nice. The hat can be made longer and the brim folded up or it can be worn as shown. An easy way to add a bit of texture is to do rounds of purl stitches every now and again. To make a very warm double-layered hat, make one and then pick up stitches along the bottom of the brim and work from there to make another hat, either in a different colour, a different pattern, or both. 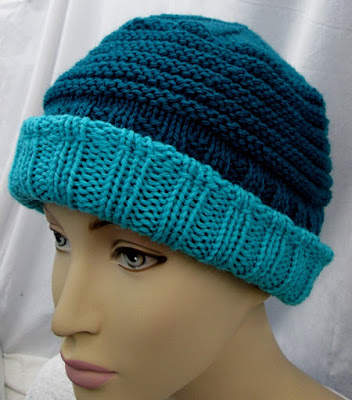 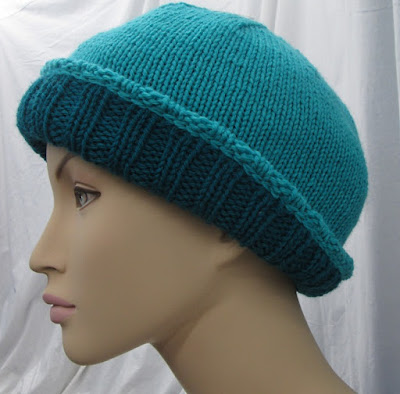 The bottom photo shows the layer made in the same way the Noro hat. The photo above it has rounds of knit stitch alternating with rounds of purl stitches to make the ridges. I made this hat 5 or 6 years ago as an experiment. Turns out to be a great in the wind! Two, two, two hats in one!

Basic Beanie
Here's the basic beanie recipe I use for yarn of this worsted weight. I'm a loose knitter and use size 6 (US) 16" circulars. If I was a tight knitter, I'd use larger needles.

Cast on 80 stitches, join, being careful not to twist.

Knit one round. Place marker.

Knit2, purl2 around to marker. Slip marker and continue in k2,p2 rib until the brim is as tall as you want it.

Once your brim is the right size, knit every round until the hat is long enough from bottom of brim to the beginning of the crown. If you want a slouchy hat, make it longer.

You can just keep knitting until the hat reaches the top of your head, bind off, thread a long tail through a tapestry needle, weave it through the bound off edges and pull to cinch closed. I do a spiral decrease for the crown, because I like the way it looks.

Cut yarn, leaving a long tail. Thread the tail through a tapestry needle and run through the live stitches left on your double pointed needles, pulling tight to close. Weave in ends. Enjoy your hat.

I hope it's a pleasant day in your neck of the woods!

Sending this on to a friend who knits . . . LOTS.
Friend and I were making slouchy hats a few years back and “talking patterns.”
She may enjoy this post.