Where did November go? It seems like it just started, yet here we are welcoming December.

We walked to see whether we could find some cranberries at the veg man who sets up here on Saturdays. I walked along the table and didn't see any, so I asked if he would be getting any in soon. He said he already had some and pulled a couple of small punnets from behind a box. I bought them. Last year, Andrew, the veg man in Moville, had bags and bags of cranberries for about a month and I stocked up, making cranberry jam, cranberry orange muffins, and shoving bags in every available nook and cranny I could find in the freezer. I am hopeful that the local grocery store will get some in--the SuperValu both here and in Ballinrobe had them during festive seasons past. For now, I am happy to have found a few cranberries and as soon as we got home, I got some jumbo porridge oats soaking in some orange juice so I can make cranberry orange muffins later. Yay!

It's just possible that November sped by me while I had my nose stuck in a book--it was an excellent, eclectic selection this month, mostly involving books I had no idea about until I stumbled upon them.

The Art of Kantha Embroidery by Niaz Zaman
I saw a blog post that mentioned kantha embroidery and, wanting to know more, I went to the library website, did a search, and requested this book. The original book was published decades ago and was updated and reprinted a few times. The author discusses the history of this kind of embroidery, which originated in what is now India, Pakistan and Bangladesh. It started out being a way to use worn sari fabric and thread to make blankets. Women would use the pieces of the fabric and also unpick threads to use for the embroidery, which was done mostly with running stitches in staggered lines. This naturally caused the underlying fabric to pucker a bit and provided added strength. Other stitches might be used for embellishment. There were traditional sorts of designs used, like the lotus. Today, there are kanthas made for a modern art market, so they’re made in non-traditional ways, using a more varied repertoire of imagery, and are mostly made to hang on the wall, instead of being made to use as a blanket. Cooperatives have been formed to provide income for women who are skilled at this kind of stitching. I found this book fascinating, combining as it did the history of the art/craft, explanations of the techniques used to create kanthas, the meanings behind the images used, and lots of photos showing both traditional and modern examples. 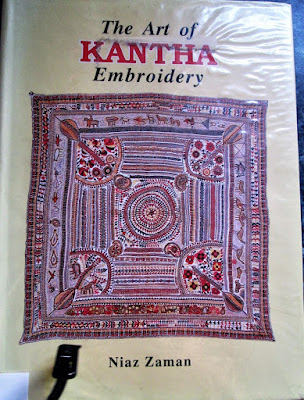 The Word Exchange By Alena Graedon
I dedicated a blog post to this book here.

The Sourdough School by Vanessa Kimball
This book is for people who are really interested in diving into the world of sourdough. The author is the founder of The Sourdough School, thus the name of the book. She talks about her own experience in the introduction, explaining how she became passionate about sourdough. She’d spent time in France as a child and then went there to learn about baking bread. When she went back to the UK, she felt terrible when she ate commercial bread, but there was no market for artisanal breads at that time. She avoided bread. Then she went back to France and a friend handed her a fresh, warm loaf, which she devoured before she could stop herself. As soon as she was done, she worried about how sick she was going to be, but to her surprise, she was fine. She discovered that she could eat sourdough. The book was interesting to read, but a bit too in-depth for me. I found the sections on science and nutrition interesting, and I enjoyed the life stories she included, but the how-to sections were impractical for me. For example, I have a small under-counter fridge, so the parts about how to rearrange things to accommodate various kinds of sourdough starter (in the event that one does not have a dedicated fridge for that purpose) were not very helpful. That said, I borrowed this book from the library and found it to be a good read. It wasn’t what I thought it would be, but that’s my issue and does not detract from the quality of the book. If anyone really wants to learn a lot about sourdough--how to start it, feed it, use it, and bake delicious bread with it, this is a good reference book.

84, Charing Cross Road by Helene Hanff
I’d heard about this book before, probably when they were releasing the movie, but I’d never read it. Bill read about the book recently and requested it from the library. This volume contained the original book and the sequel. He enjoyed it and I had time to read it before we were going back to the library, so I did. It was pleasant enough, but I didn’t love it. The first book was a collection of letters between the author and a guy (and a few others, including his co-workers and family) who worked in a book shop in London (at the address of the title). She lived in NY City, but also had a thing for London, even though she'd never been.  She loved books, and had specific requests for sometimes obscure books. The people in the book shop tracked them down and mailed them, and she posted cash to them. I enjoyed that part, because, spanning 15 or 20 years, they provided a window into what life was like in London in the 1950s and 60s, with rationing and other post-war issues. In this age of online searching and shopping, it was nice to see how the act of having to personally request books via letter led to relationships forming. The second book was about a trip she finally took to London--this was a life-long dream, but money problems derailed her plans to go several times. It was in the 1970s, I believe, that she finally got to go, but sadly, her correspondent had died shortly before she made it there. I didn’t enjoy this book as much as I enjoyed the letters, and I felt myself growing bored fairly quickly.

I hope you're enjoying this first day of December!
Share
Posted by Shari Burke at 1.12.18