The Word Exchange by Alena Graedon

I read about this book recently in a book email I got, although I forget which one. It sounded good, so I requested it from the library and finished it last night, glad to have read it.

First off, I love the cover art. 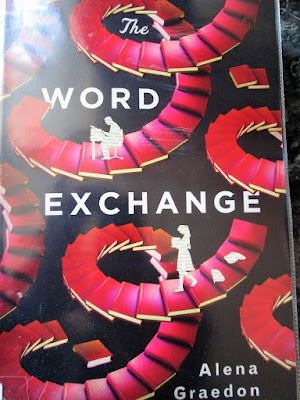 Can't really see from the picture, but the white areas are created from dictionary pages, which is appropriate for the story. Although red is not my favourite colour, I would hang a print of this on my wall.

Here's the description of the book from the back: 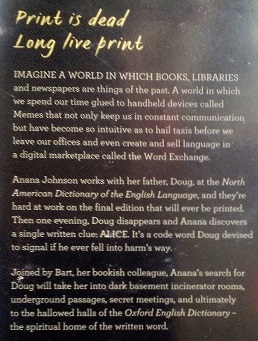 The book is set in the near future--published in 2014, there is a reference to things that happened in the past, during 2016, so we know it's at least a few years beyond that. Before he vanishes, Ana's father, Doug, starts to act even more eccentric than he often normally is, exhorting her to stop using her Meme, giving her tablets and telling her that at the first sign of aphasia, fever, headache, nausea, she should take an entire dose. She dismisses his concerns at first, but after he goes missing and she starts to try to find out what happened, she slowly comes to realize that his concerns were warranted.

She uncovers the sinister business practices of Synchronic, the company that has monetized words and discovers the people who are resisting as part of the Diachronic Society. She learns that Synchronic did not want the last edition of the North American Dictionary of the English Language (NADEL), the book she and her father were working on, to be published and the lengths they were willing to go to in order to stop it.

The book is, in some ways, just a fun read and some of it is a little simplistic and pat, but that didn't diminish my enjoyment of it. In addition to some of the predictable interpersonal relationship stuff, though, the book is a celebration of language, words, and books. At one point, Ana says, 'Words are living legends, swollen with significance. We string them together to make stories, but they themselves are stories, encapsulating rich, runny histories.' (p95) Anyone interested in etymology can relate, I'm sure.

For me, it was worth the read for the celebration of language and the written word, the reminder that things--even important things--can slip away from us without us noticing, and that words and how we use them matter. We should pay attention to how we use words, but how others can be using them to manipulate, spread chaos, and feed their greed.

This was the author's first novel. I don't know whether she's written anything else. Based on the acknowledgements, she did a fair bit of research about subjects such as philosophy (particularly Hegel), computer viruses, brain function, linguistics, and how illnesses can spread.

The book was worth the time I spent with it. 😊 I hope you're spending some quality time with a good book, too!
Share
Posted by Shari Burke at 8.11.18