We live in a small place now. We've never lived in large homes--I think the biggest place was 1200ish square feet and that was our round house with totem pole in Alaska. From there we moved to a small cabin with no running water (but a septic tank) and from there to a 700 square-foot house. Our apartments, both here and in the US have been various sizes and configurations, but never big. The last place we lived was a large terraced house. In truth, it was too large for us and I felt a bit guilty about renting it. I try to be very conscious of the resources I am using and don't like to be wasteful. It was a great house, but bigger than we needed. I frequently reminded myself that we were not using any more electricity or water than we would've in a smaller place and that we had to leave a very moldy apartment which was causing health issues, and that was the only place available.

So now here we are, back in a cosy little place, which makes me very happy. It did take a short time to get used to being in such a space, after being somewhere with what seemed to us like lots of empty space. Today I was reminded of yet another benefit of living small as Bill and I did the sweeping. We are happy to not have carpets, except for on the stairs and in the small back bedroom, so sweeping up is quick. Since there's not much floor space, it's much easier and faster than it was in the last place. I put on A Putumayo World Christmas and started sweeping the downstairs. I was done well before the 'album.' Bill did the upstairs and the stairs. The stairs are a pain in the butt, because they are covered with dark blue carpet. You look at it and piles of dust magically appear. There is a vacuum cleaner, but it's a piece of crap and we can stand there forever trying to get the stuff up with that to no avail. We find it easier to sweep the steps with a dustpan and whisk broom, so that's what we do.

The back bedroom has the same carpet. It's a small and oddly shaped room, with a very narrow end that widens out a bit at the other end, which also has a strange angle where the chimney runs up behind the wall. There's a rug over the carpet at the wide end, so that's helpful. At the narrow end though, there's a double bed shoved into one corner and a very small space between it and the wall on the other side. I can sit in the middle of the bed, stretch out my arms, and touch both walls. That long, narrow space between the bed and the wall was annoying, because of the way the carpet showed every speck of dust all the time. I'd clean it, leave the room, go back upstairs a while later and find that the dust and fluff fairies had been there. I decided I needed a rug that I could just pick up and shake out, so I gathered up small scrap balls of yarn (is anyone surprised that yarn would be my solution?) and began crocheting Romanian cords and sewing them together. When I'd done as much of that as I wanted, the rug was looking pretty cool and colourful, but it was too narrow, even for the very narrow space, so I rummaged around and found some balls of yarn that I'd gotten at a charity shop. It was probably meant for rugs or something like that because it's rough and feels a bit weird. It has a nubbly texture and I'd used some of it to make a seat cushion a couple of years ago. I wasn't sure what I would use the rest for, but figured something would come up and so it did. I used it to widen the rug by crocheting along one side of what I'd already done and doing hdc back and forth until I was out of yarn. Or so I thought. It was wide enough to use, although I noted I could use another few inches. I put the rug down anyway, figuring I could come back to it at a later date. 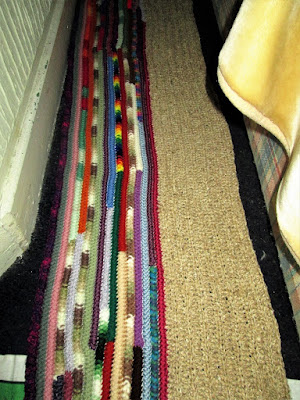 Last week, I was rummaging around in a bag to get yarn for another project, when I found a couple more balls of the nubbly yarn, so I can go ahead and add some width sometimes soon. Yay!

I am finding more time for my crafts-crochet-color books for adults-counted cross stitch-as this apartment takes little time! It is all carpet except the kitchen but I don't wear shoes inside-keeps down on dirt from outside!
Have owned large and small homes-have always dreamed of having a tiny Thomas Kinkade cottage!!! Wish I could paint-would attempt!!!
Love your rug and plan to attempt one maybe this winter-for kitchen!!