We did the Donegal dash today, so Bill could return a book and pick up a book and I could drop something off at the library. We didn't feel like hanging around there, so we took the bus that leaves here midday and gets there just as the librarian is closing for lunch. We usually pop into the Animals in Need charity shop and Aldi and have enough time to walk over to the library, getting there just as he reopens, and then having enough time to get a bus back home. And we usually go on a Tuesday.

We were a bit late getting into town today, but we still had enough time to meander over to Aldi, stopping to look in the shop windows along the way. One of the things I like about this time of year is looking at all the window displays. Some stuff is pretty yucky, but there are always cute things, too. Some of the photos have reflections due to the way the light was on that side of the street.

We checked the books at the charity shop, but didn't see anything we wanted. They were busy sorting lots of toys and books, so it was a bit crowded and we didn't hang around.

Then we went on to Aldi and as we approached, I saw this sign, remembered that the remodel had happened, and inwardly groaned. 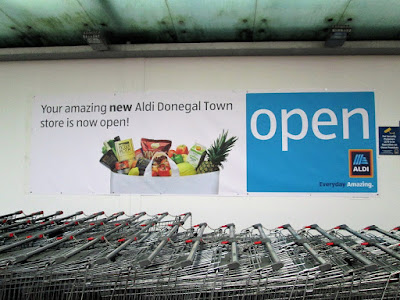 I can assure you that I was not amazed. I HATE it when grocery stores remodel and reconfigure everything. I know where things are and I make my list in order. I rarely even notice the other stuff around what is on my list, zeroing in as I do on what I want and moving on. Yes, I know this is why they change things every so often, thus forcing people to pay attention to stuff and spend more time in the store. And yes, some of the new layout makes sense. I still didn't like it, even as I had to admit that some of the chaos was my own fault. A new sale starts on Thursdays and they get new temporary stock in on Thursdays, so it's always crowded anyway. Add to that the fact that it is the 'festive season' and things were even more crazy than usual. I wandered around as quickly as I could while dodging other shoppers and the pallets of stock and the people shelving it and looking for the areas I wanted. Nothing is in the same place that it was just a few days ago (the remodel was Saturday). Nevertheless, we found the things we wanted, paid, packed up our stuff, and headed to the library with time to spare before it opened after lunch.

When Colin, the librarian, arrived and we went in, I saw the table of Christmas books for children, which are apparently not like they were when I, or even our daughter, was small. 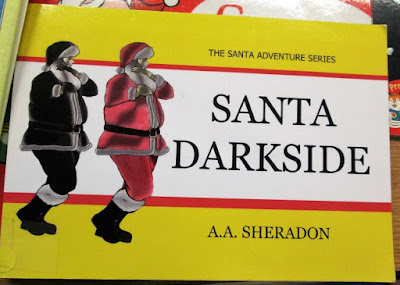 I didn't have time to read through this one, but if it's there next time, I might. I never thought about Santa's dark side and I am not sure I want to know what his issues are, but hopefully there's a happy ending.

We did our library stuff, chatted for a few minutes, and had 7 minutes to get to the bus stop to take the bus home, although had we missed it there was a Local Link bus 15 minutes later. And, come to think of it, we could have just flagged him down had we needed to.
We got there with a few minutes to spare, and just as we got there, we saw the little bus coming around the Diamond, where there was a guy putting the lights on the town Christmas tree. I expect that the next time we do a Donegal dash, there will be Christmas music playing in the town to go along with the tree, lights, and the cute window displays.

I like Donegal Town, but as we came around a curve in the road on the way home and I looked at the rocky hills and the clouds hanging around them, then looked the other way at the water moving in the wind, I smiled and thought, for the umpteenth time, 'I can't believe I get to live here.'

It's a nice day here today, and I hope the same is true for you in your part of the world.
Share
Posted by Shari Burke at 29.11.18

Liked “the ride” with you through Donegal town . . .
You write wonderfully!
I like that little white dog with the red hat . . .
Really cute!

Love this-makes one want to live there too!!!!