Last night I settled in, stuck my ear buds in, started playing some classical Christmas music that I did not even remember I had, and started hooking. I began a project using scraps, but it became apparent after a few rounds that I would not have enough for what I wanted to do. It was still a useful attempt, though, because I discovered that I love the combination of the two yarns. As I was frogging (rip-it, rip-it), I came up with a different idea for using the two together, along with some other odd balls. Then I turned my attention to other things for a while. But my fingers were itching to be working on something, and when I went into the other room, my eyes fell on a partial skein of yarn that I'd pulled from the box under the bed. I grabbed that, settled back in, started the Boston Pops playing, and began again on a different idea. No worries about yarn quantities this time--there was plenty.

Once I was done, it was almost 2 a.m. and I decided to figure out what I'd use for the centre embellishment later in the morning. So I did, choosing a bead from a deconstructed bracelet Bill had picked up for me in a charity shop a while back--it was a perfect fit. I sewed that on, then sewed a jewelry pin to the back and it was finished. 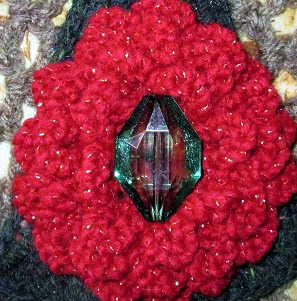 The sparkly bits are the gold-coloured thread wrapped around the red yarn. This one is about 3 1/2"x4" so I can use it as a scarf/shawl pin, stick it on a hat, or wear it on a sweater.

This morning I rummaged around in the scraps and odd balls again to gather bits for my latest commission and I cast on for the hat a while ago.  I love my odd balls and scraps!

I hope you come across many small things that bring you joy today, too.
Share
Posted by Shari Burke at 21.11.18