The last day of July has arrived. I always experience winter as here and then gone in a flash and summer as a season that draaaaags slowly on, but this July has felt like years instead of one month. I look at my book list and am surprised that it was just a few weeks ago that I read the ones at the top. Seems like they are from a more distant past.

Artwear: Fashion and Anti-fashion by Melissa Leventon
I came across this book title on the library website and requested it, only because of the ‘anti-fashion’ part of the subtitle. I sometimes joke to Bill that I am the anti-fashionista, so I was quite looking forward to this book. When I put it on hold the first time, the hold sat there, even though it said the book was on the shelf. This sometimes happens and I remove the hold and request it again, from another library if there’s more than one listing. I couldn’t request a different copy this time, since it’s the only one in the nationwide system, so after a month of nothing happening, I removed it. We moved and I placed the hold again. This time, it was placed in transit quickly. I am glad I did another request for it--what a great book! It was published to go along with an exhibition by the same name at the Fine Art Museums in the San Francisco Bay area. It explores the history and evolving philosophy of artwear, how it relates to other textile art movements, how it is used in performance, and how it relates to the world of fashion. There is a chapter on artwear within the US and in the rest of the world. The author says that, ‘Artwear...is a product of the postindustrial, Western battle of art versus craft, in which craft seeks validation as an equal to art and art seeks to maintain a proper distance. Yet it has also appeared in Asia, where the art/craft divide has not traditionally existed.’ (p 8) The book is packed with wonderful photos of example after example of artwear, some of which are meant to hang on a wall and some of which are meant to be worn, either in everyday life or as part of a performance piece. Knitting, crochet, and felting are all well represented. It’s no surprise that I loved this book!

Dressing Up for the Carnival by Carol Shields
This is a collection of short stories that I picked up in a Moville charity shop. I’m always on the lookout for short story collections and I’d read some of her work before, so I picked up this volume. Shields is quite a good writer with a really great imagination. Many of these stories started from an unlikely theme--a window tax and how a couple of artists coped with having to block their windows, authors and their creative processes leading in unexpected directions, keys--all provide inspiration for the author to delve deeper into minds and hearts. She nails academic jargon--there were a couple of times I laughed out loud. I like her writing at the sentence level, too. In the story, ‘Keys,’ she says this about one of the characters:

‘As a very young child, not more than six or seven years of age, she understood that she was scheduled to have a double existence--an open life in which her actions were plainly visible, and a hidden life where thought and intention squatted darkly. This powerful separation seems wholly natural to her, not a thing to rage against or even to question. The real world, of course, is in her own head, which she sometimes thinks of as a shut room provisioned with declaration and clarity, everything else being a form of theatre.’ (p 100)

Also, the first story begins with a woman deciding what to wear that day and the last story involves an annual naturist retreat, in which clothes play a part, often by their absence. If you enjoy short stories, I can recommend this one.

We Are Michael Field by Emma Donoghue
This is a short biography of Katherine Bradley and her niece, Edith Cooper, who were partners in their personal and professional lives. They wrote together using the pen name Michael Field. They died within a 10 months of each other, Edith in December 1913 and Katherine in September 1914. Their work is not that well known and is of varying quality, according to the author. I have not read any of it, but decided to read the book when I came across it in the e-book section of the library website, having read a short blurb about ‘Michael Field’ in another book.

Parallax by Sinead Morrissey
A prize-winning collection of poems by a Northern Irish poet.

I hope it's a good day in your neck of the woods! 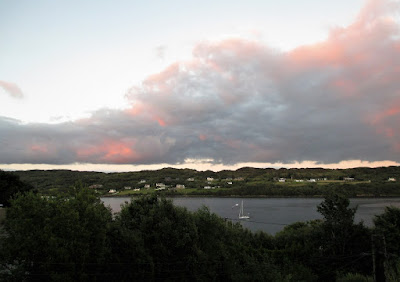 Books sound really great!!
Hope you enjoy reading today and look forward to fall.
I enjoy the seasons but not in love with the high temps!

It was a nice day today--wind, rain, cool temps--yay! We'll be back to more summery weather in a few days, but the break has been nice. I get summer SAD symptoms, like other people do in winter, so I am always glad when it's done and I feel better :-)