I was cooking supper a little while ago (wearing sandals) and had just stepped away from the stove when I heard a crash. I looked over and saw this: 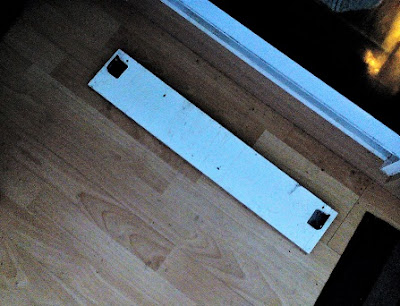 I wasn't sure what it was at first, but when I looked closer, I discovered that it was a piece of wood that was covering up a small space/shelf underneath the oven. There's a broiler pan rack in there, so at one time, the space must've been used. Upon further examination, I discovered that there are no screws or anything, in spite of the brackets you see on the wood and a hole inside the space at least on one side, where I assume a screw once was. This piece of wood was apparently just shoved in as a way to cover up the space. I felt around in the space to see if it was hot, since I had the oven on. It wasn't. I decided I can use that space, so I just tucked this piece in an out-of-the-way spot and didn't bother trying to put it back. The last thing I need is stuff crashing down onto my toes as I cook. They are already giving me problems--don't need to break one on top of the existing issues! I stepped away just in time. I wonder who decided it was a good idea to just shove the thing in there without being secured in any way.

In contrast to the shoddy work done at some point in the kitchen, the flower beds and pots outside are putting on a show. Someone (who isn't me) knows what they're doing out there as they work with Mother Nature.


Hope nothing falls on your toes (or any other body part) today!!
Share
Posted by Shari Burke at 5.7.18