The other day, we got a SuperValu ad in the post for a sale that began on Thursday and runs for two weeks. As I was flipping through it, I saw that selected stores were going to have George Foreman indoor grills on sale for 20 euro. I have never paid much attention to those, although I'd heard of them. But the ad did its job and I started thinking about it. The big focus seems to be about reducing fat in foods as you cook them, which was/is not my issue. My thing is about saving time and energy. I clicked around a little and 20 euro seemed like a decent price, plus I had a 5 euro voucher, so could get it for 15. I was confident that, if it worked as I hoped it would, we would save that much and more on electricity costs alone, plus I would save a great deal of time. Both the stove burners and the oven take a very long time to heat up--it has been this way in every place we've lived here. Just to cook a bit of fish or a few sausages would end up taking over half an hour by the time the oven got hot and things actually cooked through. Then, if I try to be efficient and cook a lot at once while the oven is on anyway, it takes longer to cook it all and I have to keep moving things around so it cooks evenly. Because of all that, I decided this indoor grill thing was worth a try. If I tried it and didn't like it, I could pack it back up and return it to the store.

I carefully unpacked it this evening, saving all the little bits of wrapping and stuff. Then I used it to cook supper. I was surprised at how quickly it heated up. First on was some sliced red onion and red bell pepper. In a few minutes, they were done and the peppers were still al dente--I could have left them in longer, but I liked them the way they were, so I put them in a bowl and covered it so they'd stay hot. Then I put on turkey burgers from one of the local butchers. The booklet that came with the grill said it would take 7-8 minutes for them to cook. I was skeptical, but that was right.

We hadn't tried the burgers before and were both happy to discover that we really like them. We had them on sliced brown bread with the peppers, onions, fresh basil leaves, and mashed avocado with salsa.

It was easy to clean the grill with a wet cloth. So it took me about 15 minutes and one small countertop appliance to cook what would have taken me more than half an hour with the oven on and 15 minutes or more with the stove burner on, both of which would have caused the kitchen to warm up--fine in winter, but not now. I saved time and energy. I am very pleased. There's still more experimentation ahead, but I see lots of possibilities here, so I'm glad I decided to get this. I won't be returning it unless it malfunctions during the next few uses.

This won't work for everything, of course, and I will still be using both the oven and the stove, but I'll be using them a lot less now and that's good. 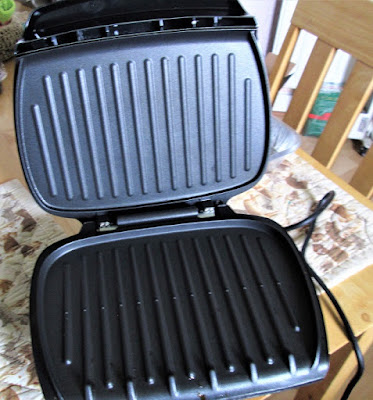 My sister-in-law has one and swears by it. She cooks everything she can on it. Glad it was a good investment for you. That is crazy that it takes that long for your oven to heat up though.

I hope you and Bill have a wonderful Sunday- xo Diana