I Know Where Your Stuff Is!

Today we made a library run to Donegal Town. I had 6 books come in last week, Bill had a couple of CDs in, and we both had stuff to return. It was time. Because I knew we were going, I took a look at the Lidl email I got the other day and saw they were going to have some sewing thread available starting yesterday. We added that to the Donegal Town itinerary. We got off the bus in the town centre and went down a street we'd not been down before, which ran into more familiar territory. We passed some colourful doors along the way. 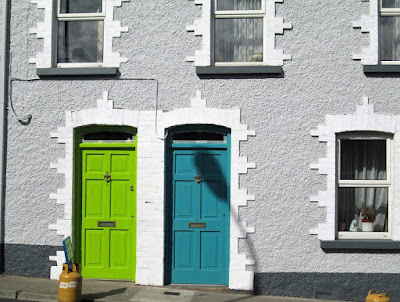 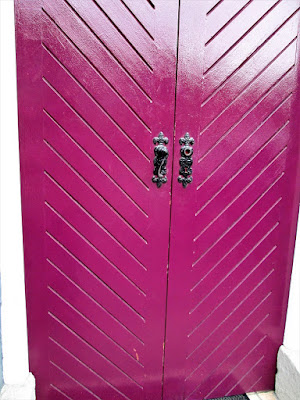 Brightly painted doors are quite common here, but these colours are not what I usually see.

We went over the river. 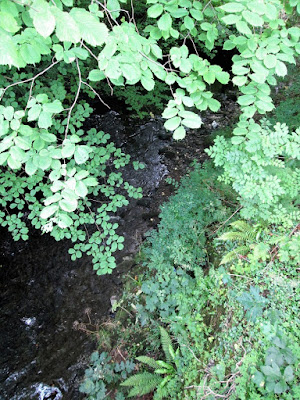 And in about 20 minutes, we arrived at the roundabout at one edge of the town where the Lidl is located. You can see that once you're through the town, you're back into a more rural area.
Lidl, like Aldi for those of you familiar with that store, has groceries that they stock on an ongoing basis, but part of the store is for rotating items. They have themes, like sewing, crafting, fashion, cleaning, tools, etc. They have a very limited selection of items available, but their prices are quite good. I've gotten sock yarn there in the past and would have gotten more last autumn when we were in Ballybofey, but it became available the day after we left. I'll be keeping an eye out this year! The sewing thread was only available in a few basic colours, but I picked up a cone of red, one of navy blue, and one of grey--I had to search the bin for the grey because it was buried. I shop more at Aldi because, although there is a lot of overlap in terms of what they sell, Aldi stocks more groceries that I use regularly so I go there more often. It's also more convenient, being in the town centre. But it's worth the effort to go to Lidl every so often.

After we were done in Lidl, we headed back into town and just poked around here and there until it was time to go to the library. We'd saved it for last so we would not have to carry around a pile of  books, some of them large. There were a lot of people in there and we were all picking stuff up. There were two librarians and it seemed that one was being trained. The more experienced guy was trying to find the holds that had come in. He was looking through piles and shifting books. Bill spotted his book, which had come in this morning, and the CDs that came last week. The woman in front of us had a book and the one behind us had a couple, all of which were finally found. Then he asked me my name. I told him. 'Ah, Shari,' he said, 'I know exactly where your stuff is. Three more came in today!' And with that, he walked over to a floor-level shelf, bent down, and came back up with a beautiful pile of books. As he dropped the pile on the desk, he commented that there was a library somewhere on this island full of empty shelves. 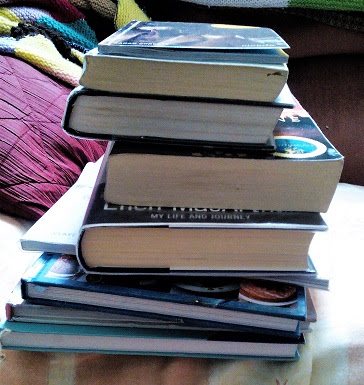 As we walked back to The Diamond to wait for the bus home, I chuckled and commented to Bill that it never takes long for me to have a reputation when it comes to libraries. They might not be able to put the name with the face right away (this is only the second time we've interacted with this guy), but they can put the name to the books and that's good enough for me!

I'm almost done with an e-book that I borrowed from the library and then I'll have to decide what to read first--I have a memoir, three novels, and a book about carftivism. There's also a cookbook in the pile--The Donegal Table, which was written by a chef from Moville. Three of the books are stitching books about various techniques. Tonight, I plan to make a cuppa or two and flip through one of them. There's nothing like the simple joy of a lovely cup of tea and creative inspiration.

I hope your day is filled with simple joys, too.
Share
Posted by Shari Burke at 24.7.18

Love love books and as a retired educator still read a variety. Love your library story!!

Just a commen-in February my daughter and two the the granddaughters were in my favorite city-NYC-for almost a week-I was eating at the NYC diner across the street from the hotel-met a lovely couple from Irelamd-here for first time-we chatted and I was impressed with their knowledge of NYC already!!! My dream is to go to Ireland but not sure I can take the long flight. I was in England in 2006 and 2008 with a group of teachers as part of Shakespeare studies-trip was arranged as a grant so didn't get to neighboring countries!! Alas!! Love reading about it!!!

I'm with you about the book love! I've always been a bookworm and have never been sorry about that.

How nice that you chatted with the Irish couple. Hopefully, you'll be able to make a visit to this beautiful country. We've been here over 4 years now and still love it.

Would hope but long distance traveling difficult for me! I do fly to Florida several times a year to son and family...Burkes of course!!!
Love that you read so much and enjoy the library. Where did u live before Ireland???