We went out today to check the charity shop and a secondhand/vintage shop for plant containers. We have an aloe vera plant that Bill picked up in a charity shop in Moville when it just had a couple of small leaves (is that what they're called on an aloe plant?). It's growing quickly and needs to be repotted. Also, he picked up a couple of segments of a Christmas cactus on an outdoor shelf outside the grocery shop in Moville. It must've fallen off a plant. There were no cacti left, but he brought home the little segments and we stuck them in some dirt. They are also growing and need a new pot. We were looking for actual plant pots, bowls, teapot--whatever would work. We'd never been in the vintage/secondhand shop before--it wasn't here when we lived here before--but we'd heard it was good. I quickly found my way to the bookshelf, as you do. I bent down to look at the bottom shelf near the floor when I hit pay dirt! 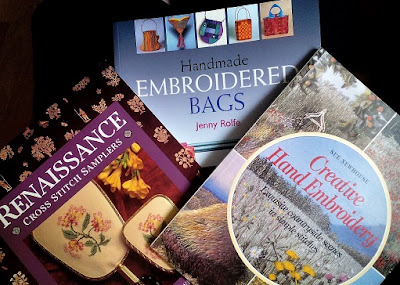 All the shelves were a mess and not at all organized, with books sitting every which way and some in front of others. The bottom shelf contained a pile of books that were upside down. So I patiently pulled them out and looked at them. I found the hand embroidery one first, then the cross-stitch, and finally, the embroidered bag book. The latter was an iffy. It's mostly instructions for specific bags which, while really cool, are not anything I would make, especially because she uses machine embroidery. But, since I knew I'd find the other two useful, Bill found nothing he wanted, and the books were a euro each or three for two euro, there was no reason not to bring it home. If I didn't like it, I could always put it in the wee free library or donate it to the charity shop. As it happens, it's a really nice book with stuff I can use and it's already sparked some ideas.  I've not had a chance to look through the hand embroidery book yet, but the cross-stitch book is a keeper and I know I'll be using charts from that. It also discusses some interesting history.

After we left there, we went to the charity shop, where we found plant containers. When we left and walked past the side window, we spotted a couple more containers that we liked and would have gotten had we seen them. But the shop was really crowded and since it's small, we both wanted to leave as quickly as possible. We'll go by again soon to see if the other bowls/pots are still there. We want to get some more plants--preferably some small cacti/succulents--but we don't come across houseplants of any kind very often.

Today I wove in the ends on the tatted hat that I started over a year ago. I got about half of it done, set it aside, and forgot about it as I moved onto other things. I'd stashed it on the window sill where it was usually behind a curtain, so not visible. I came across it in the spring, started working on it again off and on and finally finished it the other night. I can see where the sun bleached the cotton yarn a bit--the last half is darker than the first half--but I don't care. I tatted a rectangle that would go around my head. Then I crocheted the ends together, leaving a space where I could leave a ponytail sticking out. Then I crocheted around the top, decreasing for the crown. Finally, I crocheted around the bottom to make a brim. 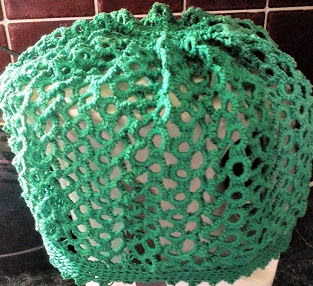 I'm looking forward to looking through the last new-to-me book later with a nice cuppa. I hope you have something inspiring on your agenda for this day, too
Share
Posted by Shari Burke at 11.7.18

Glad you found some books you like and can use, Shari.

That tatted hat is amazing. My grandmother used to tat using a small shuttle and made Irish lace. I still have quite a bit of it and I used it to finish up a christening gown that all of our kids had used...and now the grandkids have been baptised in it, too.

Hope you have a great day! xo Diana