Felted Receptacle for Pens and Other Tools

Last night I was awake, but hoping to soon be asleep, when it occurred to me that I could make a receptacle for my pens and stuff that have been scattered on the table in the living room. I'd thought about putting a mug there--we have plenty in the cupboard--but there was always the possibility of knocking it down, scattering the pens and breaking the mug. I thought, 'If I make one, I could sit it on the base of the lamp and tie it onto the long neck so it won't go anywhere.' Then I considered how to make it. Crochet? Tunisian crochet? Knitting? Sewing? I decided on needle felting. This afternoon, I sat down with my supplies and began stabbing. In a little while, I had my pens neatly in one place, with room for various other things I might want to put in there. 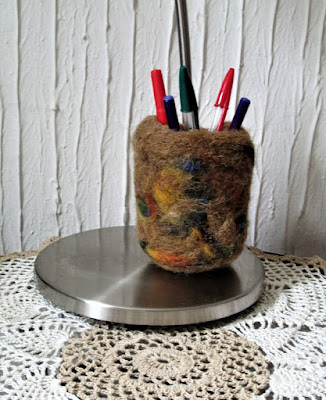 I used a small bit of multi-coloured roving with some rougher wool that still has bits of vegetation in it. First, I made a small oval for the base, deliberately leaving it at a fuzzy point, instead of continuing until it was smoother. I did that for the vertical part of the piece as well. I wanted to keep the character of the rough wool, but still have it sturdy enough to hold whatever goes in there. 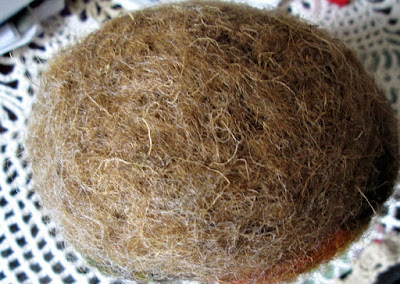 After I did the bottom, I began doing the vertical section in one flat piece, wrapping it around the bottom oval as I went along so I could make sure it would reach around. When it did, I wrapped it around a small kitchen sponge that I use for smaller pieces and felted the ends together, before felting the bottom to the larger piece. A little more stabbing to smooth the joins and it was done. I considered adding embellishments, but decided against it. I can always add something in future if I decide I want to do that. I'm quite pleased with the process and the end result.

We had a brief shower this morning, which was most welcome. I think any showers around the country will be brief and isolated, which is a shame, because we really need rain. They are saying that we need a week or continuous rain to get things to where they're supposed to be, and the drought is expected to go on for another 10-15 days. Still, even though it's quite humid, it was pleasant to go for a short walk this morning in a wee bit of mist. This did not last long, but I enjoyed it just the same.

The water was calm.

The fireweed is blooming.

And the colour of this garden flower is really popping! 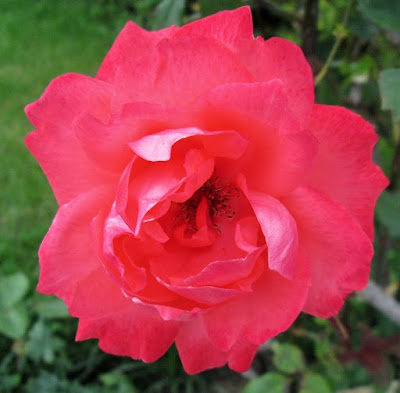 May there be much beauty in your world today.