Today I decided to see how the new indoor grill would work for bean burgers. I've had a recipe bookmarked for two or three years now, I think, and it seemed like a good day to try it. Of course, me being me, the only thing the recipe and the actual bean burgers have in common is two cans of mashed kidney beans. 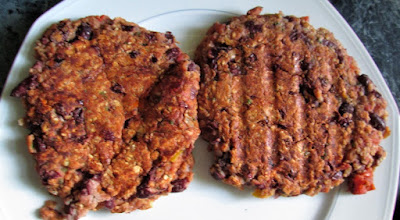 The recipe does sound good--it's got stuff like fresh coriander (cilantro), a cup of salsa, an egg, bread crumbs, and includes a yoghurt-lime dressing. I have no fresh coriander and no bread crumbs. I have a small jar of salsa that I did not want to use for this. I was prepared to use the egg, but I didn't need it.

I mashed the two cans of kidney beans. I added half a can of chopped tomatoes in the juice. I had a couple of tablespoonfuls of red pesto left from our supper last night, so I put that in. I whizzed up a bit of yellow bell pepper, a small onion, some fresh oregano and fresh basil leaves in my chopper and added that, mixing it in well. I added some garlic granules, a bit of chilli powder, and dried parsley. Instead of bread crumbs I used small porridge oats. Then I formed this mixture into patties that I cooked on the grill. We had them on wholemeal wraps with lettuce and tomato jalapeno relish. 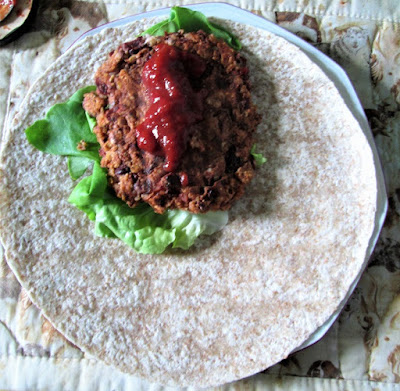 They're so good! The recipe said the shaped burgers could be frozen and cooked directly from the freezer, but I cooked them all and stuck the extra ones in the fridge. That's lunch sorted. I can see that they would be good with various sorts of herbs and spices. Next time maybe I'll add some chipotles, more chilli powder, and some dried coriander.

Earlier today, I made a salad with thinly sliced cucumber, sweetcorn, diced yellow bell pepper, chopped scallions, sun-dried tomatoes, and fresh oregano tossed with some balsamic vinaigrette I made--we had that with our burgers. It was a great summer supper. 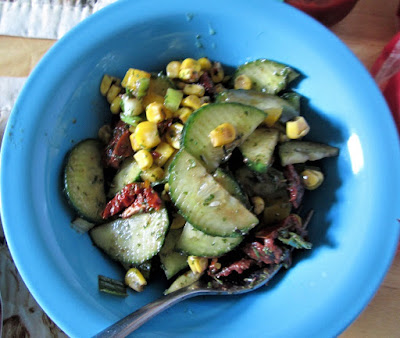 Here's hoping your day is pleasant and peaceful.
Share
Posted by Shari Burke at 18.7.18

Try a touch of red canned beets in the burger-yummy-and I use black beans--delicious. The best restaurant bought veggie burger at a restaurant in carmel by the sea and luckily one here where I live in Indiana-transplant from West Virginia where the bought burgers are not great!!

Thanks for the great bean burger tips! Veggie burgers here are breaded, with a mixture of mashed potato, carrot, sweetcorn, green beans and onion. They're good, but I like them just on their own and not on a bun. I used to really love Gardenburgers when we lived in the US--we lived in Portland, Oregon when they first came out as a kind of local product and discovered them then. Here, Lidl and Aldi sell good bean burgers, but they're breaded, so we don't like to eat them all the time.